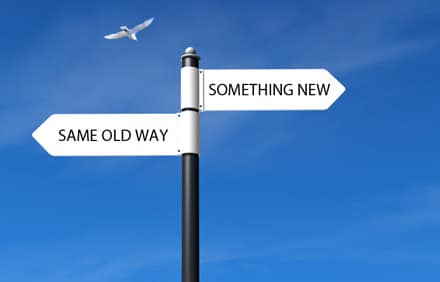 Habits are a double-edged sword.  If you develop a bad habit, it could be the huge roadblock  to you reaching your true potential.  But if you create a good habit, it could be the thing you need to take you to the next level in your endeavors.  However you look at it, habits are fundamentally important to being human.   Creating a good habit will take things that required mindful execution and transform it into something that is second-nature and thoughtless. According to BJ Fogg, doctor and founder of Persuasive Technology Lab, creating a new habit has three important elements: Trigger, Motivation, and Ability.    He believes that when a habit fails to form, it is because one of the three elements is missing.

Triggers are the first element of creating a new behavior in Dr. Fogg’s model.  A trigger is something that reminds you to do something else.  It is a “call to action” of sort.  So for any new habit you want to create, create a trigger for the habit.  The trigger will eventually create a knee-jerk reaction to the second action, the action that you want to eventually make a habit out of.  In creating a trigger, try to use your surroundings as much as possible.  For instance, if you want to create a trigger for you to read in the morning, you can leave a book right next to your coffee table every night so that your cup of coffee in the morning will be your trigger to read.  The use of triggers is extremely important in psychotherapy and has been used extensively in treating addiction and various mental disorders.

Before committing to creating the habit, you need to first ask yourself why you want this to become a habit.  Is it going to make you a better writer?  Will it make you more money?  Will it make you more productive?  If you are creating a habit without an intrinsic motivator, the habit is not likely to stick as you do not have an end-game in mind.  So if your habit is to “learn one new word a day” then you should have a definitive reason why you want to learn new words.  Is it because you want to become a better writer?  Is it because you want to be more articulate?  Whatever reason it is—have one.  The more personal the motivator, the more likely it is the habit will stick.  Finding out your “why” is the Motivation element that Dr. Fogg talks about.

Ability can come in many forms.  Constraints on your ability can be physical; you have degenerative arthritis but want to become a marathon runner.  Constraints can also be environmental or time-sensitive; you are a full-time parent who works 100 hours a week and you want to get in the habit if coding three hours a day.  So even if you have your Trigger and your Motivation to create the habit of programming daily, your habit is bound to fail if there are inherent constraints in your life, whether it be physical, mental, or environmental.

BJ Fogg’s behavioral model is aptly explained in the graph below: 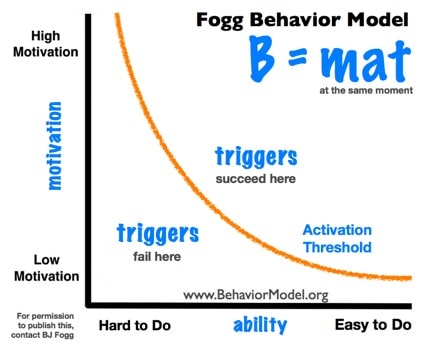 The yellow curve represents the line between failure and success.  We are likely to succeed if we pick a habit that is relatively easy to do with a moderate amount of motivation.  But if we have a habit that is hard to do, then we will fail with moderate-to-low motivation—even if we have triggers in place.  The only time we will succeed with hard-to-do habits is when we have extremely high motivation and triggers in place.

When in the process of creating new habits, we tend to overextend and overexert ourselves.  You always hear “I’m going to hit the gym everyday for two hours a day” or “I’m going on an all liquid diet for a whole week.”  While many of these habits may very well be possible for some, you do not want to place that kind of demand on yourself.  In doing so, you are setting yourself up for a big disappointment when you are forced to throw in the towel because it is too demanding of time and energy.  So when developing habits, start off slow and build upon your progress.  And remember, creating a habit that sticks is a long journey—it takes an average of 66 days to create a new habit—so don’t be discouraged if the habit doesn’t stick right away.