Some people think that naps are just a waste of time and a good night’s sleep is all you need to get through the day.  However, science has recently challenged that perception.  Mounting evidence suggests that naps are not only nice to have, they are important to optimal functionality throughout the day.  If you need scientific evidence to convince your boss to let you nap, here are five reasons you should take a nap daily, backed by science.

In the book Brain Rules, John Medina talks the importance of naps in our daily lives.  Although siestas are sometimes poked fun at, science suggests that naps may fit into our natural sleep pattern.  In the following graph, we see the interaction between the homeostatic sleep curve and our circadian arousal curve. 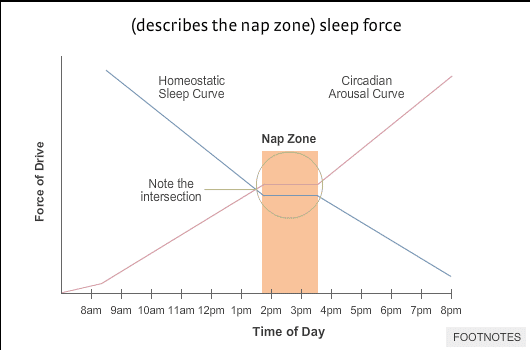 The homeostatic sleep drive (called process-S) is a wake-meter that measures the amount of time we have been awake and it triggers sleepiness when we have stayed awake for an extended period of time.  The circadian arousal, controlled by light, (process-C) produces sleepiness in 24 hour cycles.  The intersection between these two curves is the optimal time to take a nap.  And the time it intersects will depend on a person’s chronotype (lark or owl) and nutrition.  But most people’s curves intersect from 1:30 to 3:30.

In Brain Rules, John Medina suggests that the fatigue we feel after lunch is not the result of the foods we eat, but it is a biological response to us being awake for a bit too long—and it is a function of the intersection between the homeostatic sleep curve and the circadian arousal curve.

Dr. Sara Mednick and Mark Ehrman, the authors of Take a Nap! Change Your Life, suggests that naps that are as long as 90 minutes will not interrupt your nighttime sleep, given that you nap during the peak nap zone, which they state is between 1 and 3 pm.

Power naps have been associated with increased right-brain activity, the side responsible for our creativity.  Neuroscientist Andrei Medvedev used a near-infrared spectroscopy to scan the brains of 15 nappers.  What they found was that during the nap, the right side of the brain was still keeping busy while the left side of the brain stayed pretty dormant.  Another study showed that people were better able to solve creative word problems when they take longer naps that enable the napper to enter REM mode (usually 30 minutes or more).

Although the right side of the brain has been linked to creativity, Andrei Mendelev (who I referenced above) believes that there are greater implications to the right brain being active during naps.  He believes that the right side of the brain acts to consolidate memories during our naps.  In addition, when naps enter into REM zone, the brain is allowed to also start consolidating memories.  A study from the University of Berkeley found that napping acts as kind of a brain defragmenter, as it moves short-term memories into a more permanent place, clearing the way and allowing the brain to take in more information.  They believe this process takes place in stage 2 of NREM sleep, right before we get into deep REM sleep.

Many people reach for sugar at the first signs of afternoon sluggishness.  How many times have you yourself reached for a candy bar, a piece of cake, or a soda during the afternoon to wake up.  Although it may provide some alertness, the boost doesn’t last long.  In addition, these snacks contain a lot of calories and thus can lead to weight gain over time.  But what is more harming is that large amounts of sugar, especially processed sugars, has been known to contribute to the development of various diseases and disorders.

It is widely known that sugar is one of the leading contributors of obesity.  In addition, sugar has been known to been known to be one of the causes of insulin resistance, which contributes to the development of diabetes; people who drink sugar-sweetened beverages have up to an 83 percent higher risk of Type II diabetes.  But what you may not know is that sugar is also a big contributor to the development of heart disease; several studies have found a strong correlation between sugar consumption and risk of heart disease.

But all this sugar can be mitigated if you would just take an afternoon nap to substitute for the sugar high.