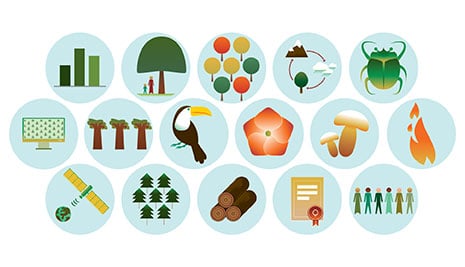 Like most economic concepts, productive resources are best defined broadly prior to being examined more closely. Put simply, productive (or economic) resources are those materials or skills which can be extracted, leveraged, or otherwise utilized by business owners, growers, or merchants to create products for sale in a marketplace.

The fundamental three are:

These are the cornerstones of any economy, as each is necessary for the proper function of industry, agriculture, and commerce. But they do stand entirely alone, as there a fourth resource without which resources might largely idle. It is that of entrepreneurship, the human drive to create, to sell, and to profit.

Collectively, these four resources comprise the factors of production or the joint means by which economic viability is birthed and sustained.

The Types of Resources

As noted, economic definitions are best understood in a broader context before being dissected and analyzed more closely. Which invites the specific question: What are economic resources in relation to the markets they drive? We should offer as clarification that these resources must be actively used to function in a productive capacity. In other words, human ingenuity and ambition are necessary for the conversion of land and labor into viable resources.

We will explore these in order of their earlier listing.

Land: The Basis of it All

Minus land, very little is achievable, economically or otherwise. Land is the very earth upon which human enterprise takes shape. It is the surface upon which human ambition is given the opportunity to flourish. Equally important, land is home to innumerable resources necessary for enterprise and ambition to be in any way realized.

On the international stage, countries either thrive or struggle based oftentimes upon the landmass over which they hold dominion. Smaller polities have found ways to thrive (Switzerland comes to mind), but typically only when they have actively developed economies along other lines.

Larger countries have at their disposal, to varying degrees, more in the way of arable land for agriculture, more forestland capable of yielding lumber, more fresh water (hugely essential), more mines or oil/natural gas reserves, and more flora and fauna.

Smaller and medium-sized countries generally have a select few resources within their borders (Kuwait’s oil, for example), but must trade for many others. The economic benefits of possessing a diverse resource portfolio are innumerable and explain why the largest countries tend to be the wealthiest. Again, there exist a handful of exceptions, but smaller countries with strong economies are often awash in oil or have spent centuries accumulating financial capital. Their margin for error is far less generous than is that of a larger nation.

Land is inherently finite, its value as a productive resource incalculable.

Labor and Its Purpose

The value of land is unquestionable, but the bounty it yields in various forms must be proficiently shaped for commercial use in order that economic benefits might follow. Known by economists and in the HR space as human capital, labor is the human capacity for resources extracted from the land to be processed for use in whatever capacities and forms are necessary and/or desirable within a given economy.

This is a dynamic resource, with human capital varying based on the aggregate education and technical skill-level of a country’s population. Better educated or more technically skillful people tend to be more economically valuable than their lesser educated or largely unskilled counterparts in other countries.

Whether you have on hand a copper mine or a massive wheat farm, human capital of one sort or another is necessary to extract or harvest the resources therein. An educated labor pool is generally preferable to an uneducated labor pool, but in some instances, the need is simply for bodies to pull metals from the earth or crops from the soil.

Capital and Its Dual Meaning

Capital functions in two distinctive capacities where economic productivity is concerned. It is primarily the money used by individuals or corporations to acquires the materials and resources necessary for their enterprises to properly function. Money circulates from consumers to businesses in a way that lubricates the wheels of a healthy economy—this is capital in its generally understood form. However, capital is also defined as the machinery and equipment used by businesses and entrepreneurs to shape resources into sellable goods.

As a concept, capital is best understood as a business’ monetary investment/stake in the creating, marketing, and selling of their goods.

Entrepreneurship might be most accurately defined as the creativity and risk-taking propensity underlying an economy. Without the brainpower of a business-minded citizenry, economic growth, diversity, and competitiveness would wither on the vine, no matter a country’s landmass and resource profile.

Though intangible, entrepreneurial spirit and drive is a plainly essential productive resource.

Plants In The Workplace Make You Happier and More Productive