Examined Existence previously published an article introducing readers to isolation tanks (or chambers).  Isolation tanks are essentially tanks void of any outside light or sound.  It is just you floating in a warm saltwater tank.  Isolation tanks began in the 1950s as a military experiment.

Since then, scientists have studied the benefits of isolation tanks to some degree and have found that float tanks are conducive to reducing anxiety, stress, insomnia, and pain.  Various studies have also shown that floating improved creativity in Jazz musicians, accuracy in rifle shooting, and focus before tests and exams. 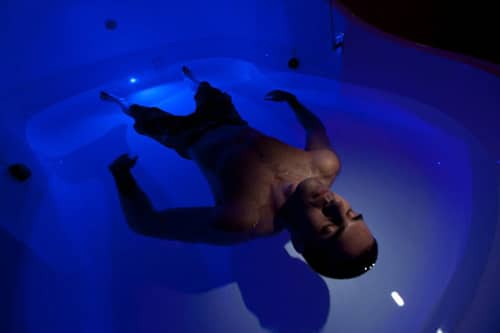 The technique takes advantage of the body’s natural inclination to relax when floating in water at a comfortable temperature.  The temperature is set so that it allows natural heat generation to escape without the need for the body to work to raise the body’s core temperature.  The floating position (faced towards the ceiling) allows the postural muscles (back and shoulders) to relax.  In addition, when the body is in this floating posture, the body’s blood vessels are dilated, reducing the body’s blood pressure and allowing for maximum blood flow throughout the body.  This floating state also reduces brain activity to a minimum and releases endorphins, which allows the body to reduce pain.

My Experience with Floating

Although I have researched much about the benefits of isolation tanks, it was not until yesterday that I got first-hand experience with floating in an isolation tank.  I signed up for an hour float.

Going into the float, I do not have to bring anything, as I was going to float naked.  They provide towels there and optional earplugs.

The tank is 2-3 times the size of a normal bathtub and has a little blue light to serve as a safety guide so I can safely get inside the tank.  Once inside the tank, I turned the light off.

They advised to start floating with my arms above my head in order to correct postural issues that has to do with sitting at a desk all day.  So that’s what I did for most of the float.

The tank did isolate all sound from the outside so it was just pretty much me, the water, and my thoughts, in almost complete darkness.  When floating, my body naturally submerged past my ears, and about an inch from my eyes.  While submerged, I was able to hear my breathe and my heart beat.  I normally don’t pay attention to my breathe or how fast my hearts is breathing; so with the first 15 minutes or so, I concentrated on my breathing and slowing my heart rate down.

Water got in my eyes a couple of times in the beginning so I did have to get out on two occasions to shower to get the sting out of my eyes.  However, water in the eyes are completely avoidable if you do not use your hands to touch your face or do not try to completely submerge yourself.  If you just let your body naturally float, you shouldn’t have any problems with getting water in your eyes.

Being in the tank for an hour really gave me time to truly be alone.  It is unlike time to myself outside the tank; time spent alone outside the tank can be filled with reading a book, looking at my phone, or watching tv.  However, time alone in the tank is just me and the tank.  Although I did not have major revelations that some people claimed to have while floating, I did have some quiet time to reflect and think.  It is quite a nice break from the hustle and bustle of my daily life.

The most profound effect I noticed right after getting out of the tank is that the tension in my shoulders were gone and the slightly tight lower back was no longer a problem.  As for the as the mental benefits, the time spent in there was really meditative—it forced me to be alone, to focus on my breathing, and to control my heart rate—all the things that actual meditation does.  However, the isolation tank also a perfect place for me to think about things and reflect on my day.  I actually wanted to nap in there but there was too much adrenaline pumping as I just got out of judo practice.

Will I float again?  Yes.  I will definitely float  again.  The first half of the float took some getting used to but once I relaxed and got the hang of it, it was extremely relaxing.  I think I will have an even better time the second time around.  I will probably float again when I need to re-center my focus or when I have tension in my postural muscles.  Floating is definitely something that I recommend everyone try at least once.  It may not be for everyone but it provides a nice contrast to the speed that society operates at, where every waking minute is spent doing something.  It’s nice to just truly do nothing for an hour.