Intelligence was once thought of as a single concept, until psychologist Raymond Cattell introduced the notions of fluid and crystallized intelligence in his research for the Journal of Psychology.  The two types of intelligences are governed by separate entities within the brain and serve different functions.

What is Fluid Intelligence?

Abbreviated as Gf, fluid intelligence is one of the discrete factors of general intelligence, according to psychologist Charles Spearman. It is defined as the innate and inherent learning capacity of all individuals. Such acumen does not depend on one’s education, learning and experience.

Fluid intelligence is overseen by the anterior cingulate cortex, dorsolateral prefrontal cortex, and other regions that affect short-term memory and attention. Activities that utilize fluid intelligence include learning, problem solving and pattern recognition.

Similar to crystallized intelligence, fluid intelligence peaks during childhood and adolescence. However, it peaks during the late 20s and starts to decline. The decline in Gf is attributed to the age-related degeneration of the right cerebellum.

Lack of practice is another factor that can lead to lower marks of Gf. Other researches point to brain trauma and injury as additional causes for the deterioration of one’s fluid intelligence.

Reduction in fluid intelligence is commonly seen in people with Autism and Asperger’s Syndrome, although they demonstrate better results in some aspects of Gf measurement tests.

What is Crystallized Intelligence?

Tagged by Cattell as Gc, crystallized intelligence is expertise resulting from the lifelong process of learning and skill accumulation. It covers capacities that a person has acquired through knowledge and expertise.

To summarize, crystallized intelligence is a lifetime’s worth of information, amassed through schooling and everyday activities. It is the things that you ‘know.’ It also covers the application of such information and developed skills to problem solving.

Because of these abilities, it is said that crystallized intelligence is governed by the hippocampus, alongside other brain regions that affect the storage and utilization of long-term memories. 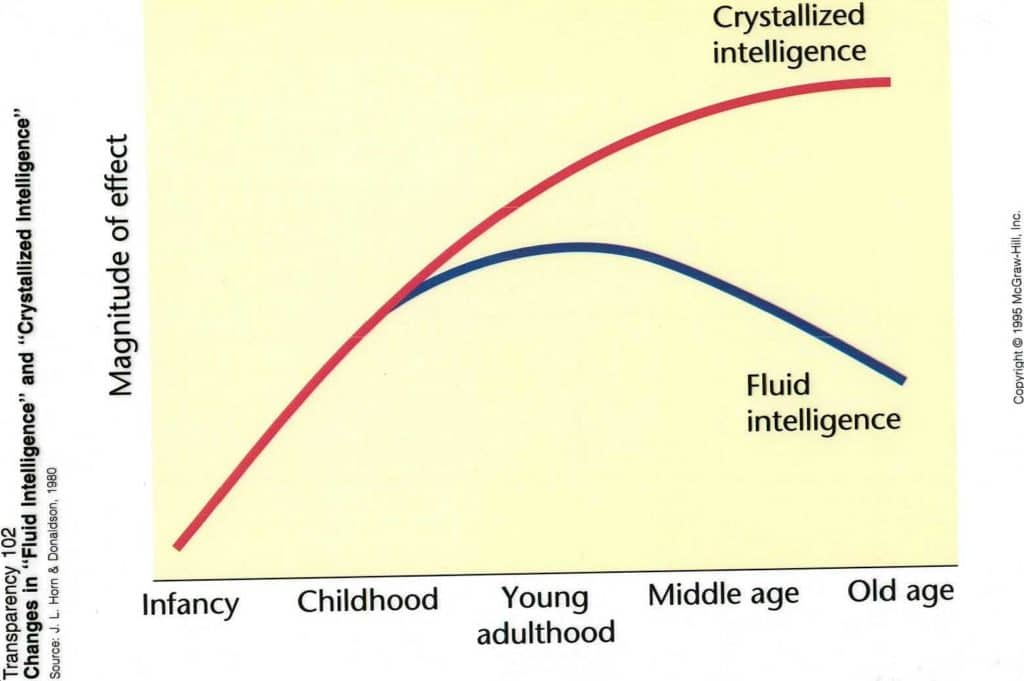 The different peak periods of Gf and Gc

The Relationship of Fluid and Crystallized Intelligence

While both intelligences are dependent with each other, they are related in different ways. Crystallized intelligence does not affect an individual’s fluid intelligence, however, an enhanced Gf can alter one’s Gc. In fact, those with better Gf rates acquire more knowledge at a faster rate. With these results, it follows that having a bigger capacity for learning can have a positive impact on an individual learning ability.

The Measurement of Fluid and Crystallized Intelligence

Contrary to popular beliefs, most IQ examinations strive to measure both kinds of intelligences. For example, the Wechsler Adult Intelligence Scale aims to measure fluid intelligence and crystallized intelligence by utilizing the performance scale and the verbal scale respectively. The results of these two scales, when combined, correspond to the individual’s IQ rating.

Although most tests cover both intelligences, there are examinations that measure each intelligence solely. Fluid intelligence is rated with the help of the Raven Progressive Matrices, the Cattell Culture Fair IQ test and tests 5 and 15 of the Woodcock-Johnson Tests of Cognitive Abilities. Crystallized intelligence, on the other hand, can be calculated through a slew of vocabulary exams.

While IQ measuring is often done in schools to predict a child’s learning capacity, some corporate environments require IQ determination as well. The Cognitive Process Profile is administered to applicants to determine the rates of their fluid and crystallized intelligences, although the markings of the former are what most bosses are looking for. According to the Stratified Systems Theory of Elliot Jacques, an individual’s fluid intelligence can predict work performance in complex, ambiguous and uncertain job environments.

For so long, experts believe that intelligence cannot be improved. Fortunately, current researches show that crystallized and (potentially) fluid intelligence can be enhanced.

One such study is that of Jaeggi et. al, published in the 2008 edition of the Proceedings of the National Academy of Sciences. In the research, they showed that fluid intelligence can be trained to a certain extent with the help of brain training.

Crystallized intelligence, too, can be improved, as postulated by Tracy and Ross Alloway in their research entitled “The Efficacy of Working Memory Training in Improving Crystallized Intelligence.” According to the study, individuals who undertook working memory training fared better in cognitive training exams, compared to the control group who underwent knowledge-based training.

By introducing the concepts of fluid and crystallized intelligence, Cattell has proven that all individuals have been given equal, if not adequate acumen at birth.

Apart from having the same learning capacities, Cattell’s research shows that the learning processes are similar in every individual as well. In this light, each and every human’s cognitive abilities are affected by short-term memory duration, memory span, learning biases, among many other factors.

The implications of intelligence-enhancing researches are inspiring – as results show that there is still a way to improve one’s IQ. Through brain training and working memory training, those who want to become smarter can finally improve their cognitive abilities by several markers.