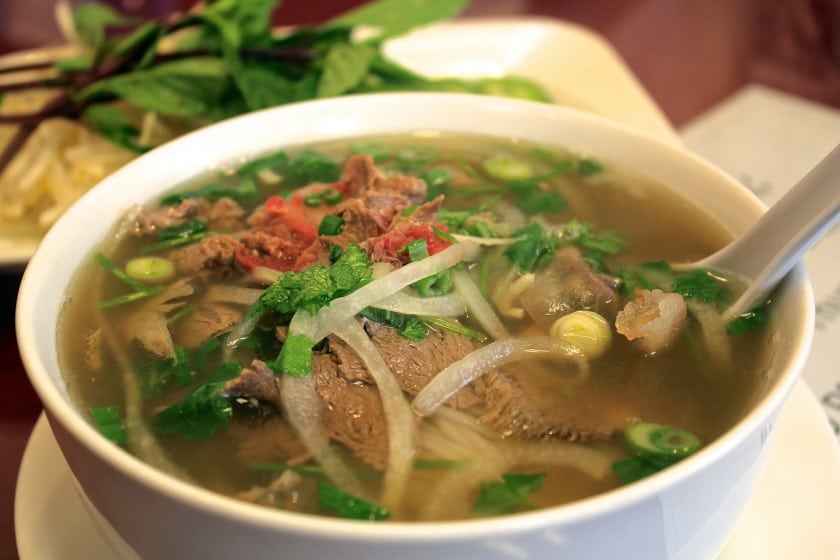 Bone broths have been used for centuries particularly in the preparation of soups, stews, sauces and reductions. This nutritive supplement is basically prepared by boiling bones together with vegetables, meat, and/or spices. During the process, the liquid is normally skimmed and thereafter, the solids removed by sieving off any remaining liquid. The resultant product often has a light flavor and thin texture.

Although bone broth is not new, it has recently become popular because of academic and scientific interest.  It turns out that bone broth is extremely nutritiuous for human health.

Bone broth been proven to have the ability of shortening the healing period among those who are recuperating from different illnesses because of the many nutrients with anti-inflammatory properties (such as glycine, proline, and arginine).

Bone broth nutrition is also beneficial to those whose immune systems have been weakened. Chicken bone broth in particular helps cure respiratory diseases. It is rich in cysteine, a naturally derived amino acid that has the ability to reduce mucus that forms in the lungs. This enhances the removal of excessive mucus from the respiratory system thus eliminating infections in the respiratory system.

It’s proposed that feeding on bone broth nutrients as one of the ways that kidney functionality can be improved. This benefit extends all the way to the adrenal system, which has also been proven to heavily rely on nutrients that are found in the soup.

In this regard, those who constantly suffer from adrenal fatigue ought to be fed on this supplement. Bone broth supplies the adrenal organs with nutrients required to optimize their work. Specialists have even gone ahead to suggest that the nourishment contains a nutritional matrix. This is helpful in patching up any holes that might develop in the kidney tissues. These holes often make the organ to function way below its capacity.

3) Protection of Teeth and Bones

Human bones and teeth are one of the main beneficiaries of broth consumption. Interestingly, teeth and bones are exactly made up of the sale elements that are found in bone broth. Experts have attested to the fact that nearly 65 per cent of the bone structure is phosphorous and calcium. These are the main elements that constitute the human teeth. Under normal circumstances, ingredients used in the preparation of broths are stewed for hours. This enriches the end product with calcium and phosphorous. Anyone taking the broth is bound to end up with a strong support structure, with teeth that can resist decay or heal from any decays. Research pioneered by the Penn State University shows that athletes who take broth have a lower risk of sustaining injuries.

Broth has been recognized as one of the richest sources of naturally obtained collagen. This is a type of protein, which is mostly found in large quantities in the bones, cartilages, ligaments, tendons, skins and bone marrow of vertebrae animals. Being vertebrae animals, the bones and tendons found in the human body get worn out with age thus lowering our flexibility. With age, the human cartilage also diminishes rapidly due to constant attacks by antibodies. Those who are aging are often advised to take broth because it plays a major role in the restoration of the cartilage. Gelatin, a major component in broth also cushions bones thus enabling swift movements without any friction. This is imperative in the maintenance of healthy bones during old age.

5) Restoration of the Gut

Broths contain a high percentage of gelatin, which is crucial in healing the mucus lining located in the digestive system. The product is highly recommended to patients suffering from Leaky gut, a condition that impedes proper digestion of food. There are also people who suffer food sensitivities especially towards wheat and dairy products. Taking broth goes a long way in eliminating such sensitivities because it soothes the human digestion system. Any imbalances in the digestive system are also eradicated when this product is consumed. Constituents that make up broth go a long way in aiding the growth beneficial bacteria known as probiotics in the gut. This in turn boosts tenderness levels within the digestive system. This has been proven by a report published by the Journal of Clinical Gastroenterology.

Collagen, which constitutes a huge chunk of elements contained in broth, is useful in the formation of elastin in the human skin. People who regularly feed on broths are likely to look much younger and toned than those who do not. Collagen has been credited with having the ability to reduce the obvious signs or aging, which usually include wrinkling and a reduction in puffiness, among others. Those who consume broth regularly have proven the fact that their cellulite levels decreases after the first few weeks, leaving the skin smooth and healthy.

Feeding on broth is one of the surest ways that can be used to obtain glutathione, which is necessary for antioxidant defense, the metabolism of instruments and monitoring of cellular functions. A report published in the Journal of Nutrition points out that the benefits of glutathione include the regulation of gene expressions, synthesis of proteins, production of cytokines and the proliferation of body cells. Broth contains glycine, which is helpful in the conversion of glucose into energy and the constant supply of antioxidants that slow down the aging process.

The nutrition content of broth greatly depends on the age and quality of ingredients used. To get maximum nutrients, nutritionists advise that the meat or bones used should be from animals that are not too old. Old animals often have a low nutritional percentage because much of it is spent up. To understand the nutritional value of broth, one needs to have an insight about the nutrients found in each component used.

Bones of animals have a high amount of calcium, sodium, magnesium, sulfur, silicon and potassium. When used in the preparation of soup, these nutrients are released, thus directly benefiting those who feed in the product.

Surprisingly, most of these elements are required by the body in amounts exceeding 100 milligrams per day. Each of these minerals plays an important function in the body. Calcium is the most beneficial and most abundant. Those experiencing calcium deficiencies ought to take broth. This is helpful in the control of insomnia, rickets and dental diseases.

This is an important component in broths. It is responsible for enriching the supplement with Vitamin A, omega oils 3 and 6, Vitamin K, selenium, boron, iron and manganese. In addition, marrow derived from beef and mutton is rich in CLA. This comes in handy in the treatment of common disorders like Chrohn’s disease. These minerals and nutrients also increase the uptake of calcium into the body and the prevention of anemia and other blood-related disorders. Bone marrow also helps in the treatment of myotonia atrophica. The nutritional richness of bone marrow highlights the benefits of eating broth.

Commonly found in meats used to make broth, these tissues have a lot of glucosamine and chondroitin. The two components are helpful in eliminating arthritis and joint pains. When connective tissues are cooked during the preparation of broths, collagen contained in them is usually converted into gelation. This boosts red blood cell and hemoglobin production. In addition, there is an increase in calcium manufacture, absorption and deployment within the body. For maximum benefits, it is advisable to use parts such as chicken feet and animal ribs, which have a high degree of glycosaminoglycan. 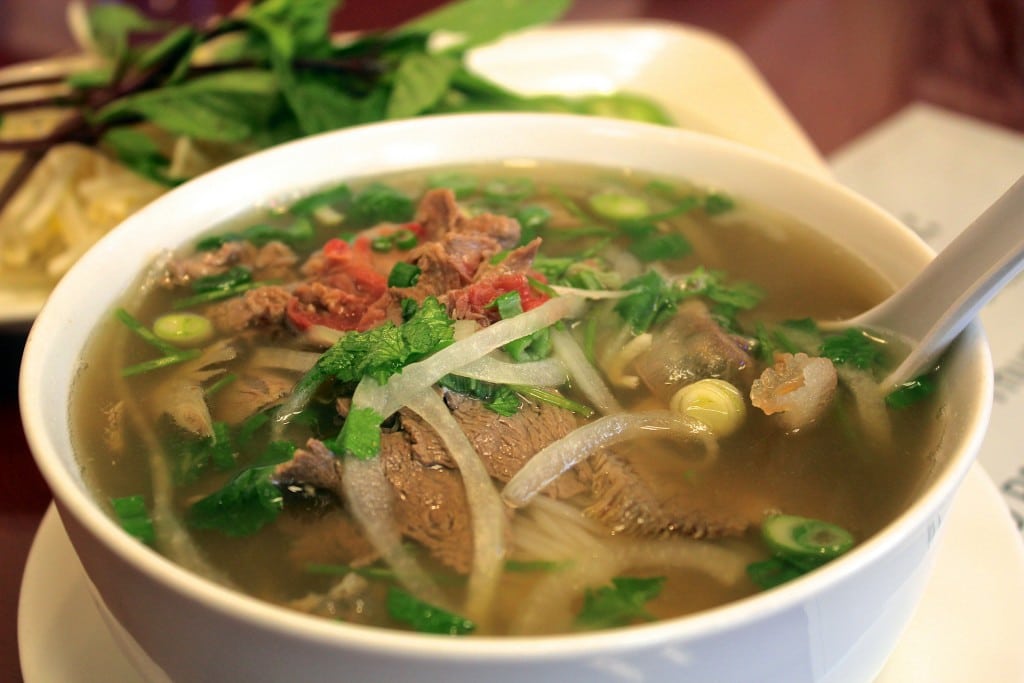 Bone broth is actually fairly easy to find.  It is used as soup base in many soups.  One soup in particular is pho.

Pho is a common broth that originates from South East Asia. Basically, it is a noodle soup made up of broth, rice noodles, some exotic herbs and meat. It is commonly eaten alongside beef. Beef bone and bone marrow is used to make the broth in pho.  Bone marrow is a rich source of gelatin, which increases the overall nutritive value of broth. While preparing the delicacy, it is important to choose leg bones because they contain a lot of marrow. Including it ultimately makes the pho nutritious and delicious.

The soup has a remarkably low amount of calories, which makes it fit for those who wish to lose weight. A plateful of pho for instance only provides those who feed on it with 367 calories. Pho contains a considerable amount of beneficial fat, which can be easily metabolized by the body. For every plateful eaten, one gains an average of 4 grams of unsaturated fat, which is within the required threshold. The soup also contains a considerably high amount of fiber. In spite of this high carbohydrate content, only 2 percent of it is dietary fiber. This explains why one feels full after eating this soup. Athletes are advised to consume pho because of its high protein level, which helps increase muscle gain.

Soups have been consumed for ages with different nutritional purposes. Despite the fact that many people tend to overlook it because of its long preparation time, it is slowly gaining mainstream acceptance. It is high time that people changed their perception towards broths. This will help curb the rampant consumption of fast foods, something that is causing many health complications.

The benefits listed here will need to be studied and verified further to be accepted by mainstream scientific community, like much else.  But early adopters and scientists on the forefront of nutritional health are very bullish on the benefits of bone broth