Money makes the world go round.  That is why money is one of the main worries for everyone.  According to the American Psychological Association, money tops the list of sources of significant stress for people.  But worries about money may sometimes be unfounded.  Of course, when you are impoverished and living paycheck-to-paycheck, money is a legitimate concern.  However, if you can afford the basic necessities and have some discretionary income, you can afford to worry a little less about money.

A lot of the worry about money comes from the fact that we equate money with happiness.  Although there is an oft-quoted saying that “money doesn’t buy happiness”, the majority of people do not really believe it.

But research shows that more money doesn’t equal more happiness.  According to research from Princeton University, $75,000 is the optimal income for happiness.  Making beyond $75,000 will not bring any extra measurable amount of happiness.  Princeton University’s Woodrow Wilson School surveyed over 450,000 people and found that $75,000 allowed someone to live comfortably and be able to splurge on what they want every so often—and this equated to happiness.  This survey did not focus on daily up-and-down happiness, such as having a bad day at the office or just being in a really crappy mood in the morning.  Rather, the study focused on long-term happiness that focuses on deeper, long lasting fulfillment.  At $75,000 people felt a deep sense of satisfaction and gave them a positive outlook of the future.  But researchers saw that above $75,000 did not bring bring any measurable increase in happiness.  However, below $75,000, dissatisfaction starts to arise and life’s worries start to take over (bills, mortgage, discretionary income, etc).  The chart below kind of shows the relationship between money and happiness, with more money not necessarily bringing about more happiness: 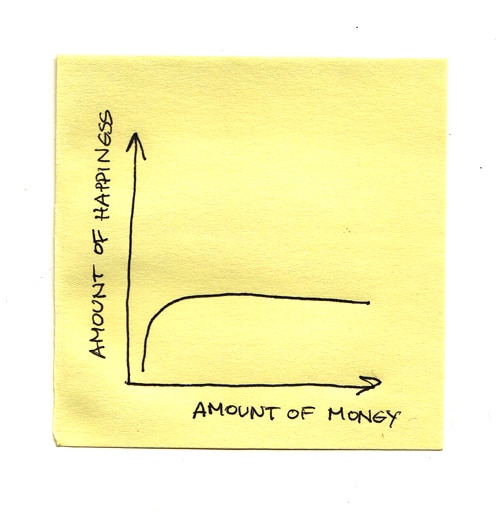 So what can we take from this study?  That more money, after  a certain threshold, doesn’t mean more happiness.  If it did, there wouldn’t be so many millionaires suffering from depression.

Although the study cites $75,000 as income for optimal happiness, it is important that we do not equate $75,000 to overall happiness.  In fact, some of the happiest countries in the world have most of their population making less than $10,000 a year, and are not middle-class by any means.  I can attest that some of my family’s happiest times when I was a child was when we barely had enough suffice.  Although we didn’t have much money, we had love and spent time together.  Having $75,000 is nice, but it doesn’t mean that you will automatically happy once you make that much.

Debt nags at you.   Someone who makes $3,000 a month with no debt will be astronomically happier than someone who makes the same amount of money but has debt.  Ryan Howell, professor of psychology at San Francisco State University states that stress from debt can and may “completely eliminate all the happiness” you get from spending your money, and then some.

However, paying off debt can bring  many psychological benefits he says, such as restoration of self-esteem, become more goal-oriented, less stressed, and more happy.  Getting into debt that go beyond your means of repayment is listed number 5 on the list of top 100 stressful life events (according to the Life Events Inventory).

Although big purchases such as a car or a house would require some amount of debt, make sure that the debt you take out for those big purchases coincide with the actual amount of money you make.  If you don’t have a big family, you don’t need a 3,000 square foot house.  Many millenials are opting to rent their houses now because they do not want to take on debt.  While conventional wisdom says that a house is an investment, the people that rent are also avoiding a six figure debt and have the freedom to move around whenever they wish.

Change your relationship with money

The problem with society is that money is too much intertwined into the fabric of our daily lives—-it defines who we are.  It shapes us.  But it shouldn’t be that way; money shouldn’t define who we are.

John Armstrong, in the book How to Worry Less about Money, said “our worries about money—when it comes to money—are about psychology as much as economics, the soul as much as the bank account.”  In addition he notes that “money can purchase the symbols but not the causes of serenity and buoyancy.  In a straight-forward way we must agree that money cannot buy happiness.”

Your relationship with money cannot define you if you want to worry less about money.  Do not think of money as a status symbol and do not associate material gains with happiness. Happiness is a state of mind, and not about how much money you have in your bank account, or all your material belongings.  Happiness only requires that you have enough money to provide for your basic necessities.  From thereon, you should surround yourself with your loved ones, find a passion to pursue, and live how you want to live, and do things that you want to do.

John Armstrong says an important ingredient in warding off money worries is differentiating our wants and needs.  The need-desire distinction is useful in warding off wasteful spending, like upgrading a smartphone when the old phone works fine or buying a new wardrobe when the clothes you are wearing fit perfectly fine.  Sometimes our desire is masked as a need—such as “needing” a faster computer or “needing” a newer car.  On the road to worry less about money, it is important that we differentiate between our wants and needs.  Now this is not to say that we shouldn’t have any discretionary spending—what is the point of money if we are not going to spend it?  But discretionary spending should be the exception, and not the rule.

The want drive is fueled by the desire to “keep up with the Joneses” and associating material gains with status and wealth.  As soon as you stop caring about what is cool, you will be able to differentiate your wants and needs much better.

To sum it up, you do not need to make more money to worry less about money.  Worrying and happiness is a frame of mind, almost completely independent of money.  Worrying is not a byproduct of how much money you have it.  Once you find contentment with the amount of money you have, and stop letting money define your identity, money becomes less worrisome and you will be happier.  Of course all this necessitates on the premise that you are not living paycheck-to-paycheck and are able to afford the necessities to live a thriving life.

In summary, the following criteria is important for worrying less about money:

Those five ingredients are paramount to worrying less about money.  As soon as you do those five things, you will find that your worries about money will dwindle.