How to Be Mentally Tough Like a Navy Seal 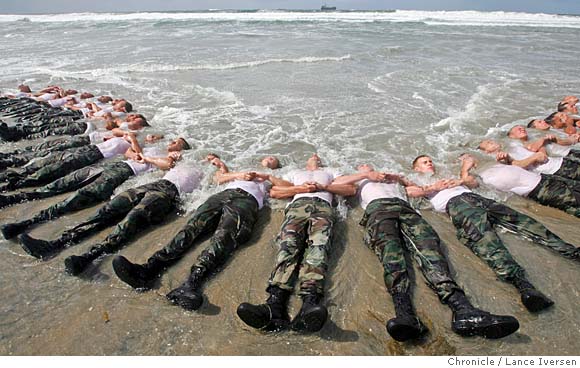 Navy SEALS are known to be the most well-trained special force in the United States military.  Some go as far as to say that SEALS are the most well-trained special force in the world.  In order to become a SEAL, a candidate has to pass several developmental courses as well as the infamous 6 month Basic Underwater Demolitions/Seal Training (BUDS) course. BUDS is the most physically and mentally draining training regimen in the military; during Hell Week of BUDS, students are allowed less than four hours of sleep for the whole week.  But the whole point of BUDS training is to test a soldier’s will and mental fortitude, and weed out those that are not mentally tough enough to be SEALS.  The course is designed to break down even the most mentally resilient individuals.

Although incoming BUDS candidates in recent years are physically fitter, the attrition rate still remains around the historic average of 75%, thus leading psychologists to determine that it not physical might that prevails through BUDS. Rather, it is mental toughness and resiliency.  Navy psychologists have studied that 25% that have made it to see what traits they have in common that makes them a SEAL.  Lars Draeger in his book Navy Seal Training Guide: Mental Toughness offers a glimpse into the mind of SEALS to see what makes them so mentally tough.  In his book, Lars Draeger outlines the traits all SEALS possess that makes them mentally tough enough to endure physical pain and fatigue day in and day out.  According to Draeger, there are four mental traits that SEALS possess that makes them mentally tough.  He calls this The “Four Pillars of Mental Toughness.”  The four pillars are setting goals, mental visualization, positive self-talk, and arousal control.

This pillar should come as no surprise as successful people regularly set goals to achieve.  However, SEALS don’t just set opaque goals.  They break down their goals into micro goals, short-term goals, mid-term goals, and long-term goals.  Instead of thinking of completing the six month training course as one goal, those who graduated BUDS broke down the six months into weekly goals, daily goals, hourly goals, and even goals by the minute.  For instance, during a 90 minute “grinder session” at 6 am in the morning before breakfast, SEALS would simply (and solely) focus on getting through that set of 90 minutes.   However, the student will break it down further by getting through one set of exercise at a time.  Setting extremely short-term and specific (yet simple) goals allows the mind to focus on one thing at a time without distraction.

Extremely short-term micro goals coupled with longer-term goals are what allow SEALS to be so successful at their jobs, and in life.

Mental practice (or visualization) has been used by Olympic athletes and world class musicians for quite some time to supplement, augment, and improve their craft.  As a matter of fact, some psychologists think that mental practice is just as important as actual practice itself.  In BUDS, those who excel used mental imagery to get through the tough six months.  During the second phase of BUDS training, one of the training exercises required the students to wear scuba gear to perform a variety of emergency procedures and corrective actions to resolve problems with the scuba equipment.  But all this must be executed while the student is underwater.  That’s not all—during the exercise, the instructors attack the students and disconnect the scuba equipment, leaving them deep underwater without any equipment.  If the instructor feels that the student isn’t relaxed or is too anxious during the exercise, the student fails.  This exercise is one of the most difficult graded exercises out of the entire six months of BUDS.

So anytime that you are faced with a tough goal or task, visualize yourself successfully completing it over and over again.  This constant visualization serves to prepare the mind for what is to come.  When the mind perseveres, the body usually follows.

You have conversations with yourself many times a day, often unaware that you are doing it.  This self-talk is not always positive or productive; you are sometimes telling yourself that you are not good enough or that you can’t do something.  Those who graduate from BUDS block all negative self-talk out and only use the concept of positive self-talk to constantly motivate themselves to keep going.  Many SEALS remind themselves constantly that many men before them have completed the course and so can they.  They remind themselves that should be able to pass no problem because they are more physically fit than their predecessors.  They remind themselves to go on and not quit, no matter what.  Because every minute of BUDS training is a test of mental fortitude, SEALS have to constantly use self-talk, sometimes every few minutes so they can have the grit and will to keep going.  Having positive self-talk often serves as a constant reminder to hang in there and persevere.

Controlling your mental state is extremely important to being mentally resilient.  SEALS are able to control their physiological and psychological response when aroused by outside stimuli (such as danger).  When our bodies feel overwhelmed or in danger, it releases chemicals known as cortisol and endorphin. It is these chemicals that cause our palms to sweat, our minds to race, our hearts to pound, and our bodily functions to malfunction.  This is the body’s natural response to stress, developed over millions of years of human evolution.  But SEALS learn to control this natural response to arousal so that they are poised even under the most stressful of circumstances.

One method that is taught to SEALS to control arousal is the 4×4 breathing technique.  You begin by inhaling deeply for 4 seconds and follow with four seconds of steady exhaling.  Draeger stated that this must be done for a minimum of 1 minute to be effective in controlling arousal.  Of course, this is not the only method for lowering stress but it is the one that is mentioned in the book.

For more tips on becoming mentally tough like a Navy SEAL, you should read Lars Draeger’s Navy Seal Training Guide: Mental Toughness.  The book offers excellent insights into what makes a SEAL, and how you can apply some of that training to your everyday life, no matter what your goals are.