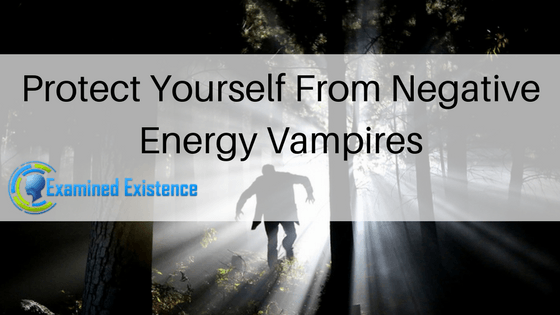 Those who focus only on the negatives on life can have a profound impact on your mental health. Protecting yourself from these ‘negative energy vampires’ will help you improve your mood. And hopefully, improve theirs.

Everyone knows someone who is chronically unhappy.

Certain types of people are just a drag to be around. Whether they’re always bringing up macabre or dark topics. Or simply obsessed with the latest way the world has wronged them.

Surrounding yourself with these types of people can be dangerous.

As people, we’re often bolstered by those who hope to encourage us and inspire us. But we are just as easily brought back down by critics, nihilists, and unhappy people.

Normally, a balance is necessary and healthy for all people. The problem comes when the only voices you hear are those who bring you down.

Those who constantly bring down your mood and energy whenever you find yourself near them are like vampires. Feeding off of your positive energy without generating any back in return.

These energy vampires may or may not mean to do this to you, but the result is always the same.

That’s why you need to learn how to recognize a vampire.

Ways to approach them, and uncover ways to combat the problem. And know when a little distance could go a long way to your overall mood and mental health.

Emotional Vampires: Dealing with People Who Drain You Dry, Revised and...
Check Price

Energy Vampires: How to Deal With Negative People
Check Price

Determining who is and who is not a vampire. Furthermore, is one of the most important keys to finding success in your mental health and well-being.

For instance, people going through genuinely difficult problems. And need your help are different from those chronically pre-disposed to weighing down the lives of others.

Often, this distinction comes down to how the person in question views themselves. If they tend to discuss terrible events as if these need to be changed by them. Then they may not necessarily be vampires.

However, if this person talks about their problems regarding how others have wronged them or let them down. Then that deflection can be a sign of a problem. That is especially true you notice the trait occurring over a long period.

While life can be filled with actions that are both our fault as well as the fault of others. Constantly deflecting blame is often unhealthy and a sign of a vampire in your life.

Those who drain your energy often do so for different reasons.

Conversely, uncovering these reasons will also help you better identify those problematic in your life.

For instance, blame deflection is a sign of someone who looks to themselves as the victim at all times. However, not all vampires are equal. Others may react differently, by remaining self-obsessed. And focused on how others remain inferior to them.

Still, others will not focus necessarily on themselves.

But talk on surface level problems that signify greater unhappiness within them.

These are people that find themselves constantly surrounded by drama. And other sources of divisive combat. And also relish in the ability to bring unpleasant news to others each chance they will get.

Finally, not everyone who remains a vampire in your life is doing so insidiously. Also, most are unaware of how their mood and demeanor harms others. For the especially inexperienced.

This constant outlet of deep unhappiness could come from either not knowing how best to express themselves. Or a cry of genuine help.

It’s important to remember that each vampire ended up there for a reason. So simply cutting people out of your life is too vague of a suggestion to truly implement.

Look for changes over time and try to sort out what’s causing these people to act in the manner that they are.

Once you have, you’re ready to move on to interaction and self-protection.

Now that you know which people in your life are draining you of much-needed positive energy. You’ll need a plan of attack for interacting with them.

Of course, limiting your time with a person might be a simple solution. But it’s not always possible, so we’ll be assuming your interactions are required for this discussion.

One of the biggest steps towards recovery is awareness.

Which can have profound applications for both you and the other person. By remaining aware of a person’s vampiric nature. You can notice when they bring up certain topics or approach you in certain ways. That either consciously or subconsciously are meant to bring you down.

Therefore, it’s important to retain your positive mood throughout the interaction. And not stoop down to entertaining the negative forces. For instance, keep the conversation light and as pleasant as possible. And also pivot away from unsavory topics.

While this may initially be seen as remaining shallow to the person you’re interacting with. It’s also important for you to draw a line in the sand. In the sense that any topic moving forward needs to remain spun in a positive light.

It’s also important to remember that. While you need to work towards improving your mood during these interactions. That remaining surface level is not necessarily the only path forward for this person.

If your vampire insists on discussing deep and profound issues in their lives.

Always focus on the agency of the person and their ability to incite real change. An energy vampire will have difficulty in spinning a problem negatively. If you insist that actions can still be taken.

For those that refuse to recognize their agency. Or otherwise explain to you how nothing can be done.

For instance, explain to them how, if there’s nothing to be done, what’s the use in even discussing the matter?

Such an outlook will be sure to shock the vampire. As it could easily be perceived as overtly negative or hopeless. In reality, optimistic nihilism embraces what we cannot hope to change. And brings peace to those who’ve accepted something as another aspect of their daily lives.

Embracing the unavoidable and the unchangeable. Also pivots your vampire into embracing their agency. Thus, forcing them to accept the events as they are, rather than pontificating over how they should be.

Likewise, use this newfound awareness to try and bring awareness towards the person you’re interacting with.

Ask them why they tend to focus on problems that are either unavoidable. Or consistently complain about issues that can be changed with a little bit of effort.

If they enjoy discussing others or focusing on the negative talk of the town. Then ask them why it’s important that these issues are discussed. Try not to play therapist too much—but at the same time, bring awareness of the issue towards them.

Doing so may not do much for those who are unwilling to change. But for those who do not realize the consequences of their actions. Or have never considered how their actions are perceived by others, you might cause a wake-up call.

The most important way to combat energy vampires is to remain above the line of fire.

Do not give into pity beside acknowledging the problems at hand. And do not let these people derail conversations with yourself and in groups of people.

If they begin to notice your actions and ask you why you insist on this new outlook. Simply explain that you’re trying to keep positive and responsible for your happiness—regardless of others.

How you choose to explain that sentiment will surely depend on the situation. But generally will result in another cause for alarm for self-aware vampires.

Finally, if you find that certain people are simply too negative for you to be around. Then it’s time to implement some controlled avoidance.

Avoiding negative energy vampires is especially difficult. As while the term is somewhat dehumanizing, vampires are often our friends, our colleagues, and our family.

That’s why going cold turkey and burning bridges is the wrong way to go about avoidance. In any case, such drastic measures will only bring more negativity into your life.

Practice cutting short conversations that are regressing into negativity. Or express that certain subjects are too unsavory to talk about at a certain juncture.

If you find that the vampire in your life feels incredulous at your actions. Explain that there’s simply too little time in the day to spend so much of it focused on negativity, and carry on. Either they’ll lighten up for the time being, or fade away entirely.

Being kind and being clear is one of the only ways we can defend ourselves. So while avoiding these negative energy vampires you know and love isn’t easy, try hard not to express outwardly to them. Lest you be dragged back into their negative mindset.

While practicing avoidance, seek wise council from positive people in your life and others that you respect. Their advice will go a long way towards sorting out problems too specific for a one-size-fits-all solution.

Ultimately, those who fester in their unhappiness for too long either have chosen this mindset for themselves or need to seek out the help of a licensed professional.

In either case, the most you can do is encourage healthy living habits, express your concern—but also your hesitance.

Emotional Vampires: Dealing with People Who Drain You Dry, Revised and...
Check Price

Energy Vampires: How to Deal With Negative People
Check Price

Understanding Your Lung Health: An Infographic from Mesothelioma Cancer Alliance