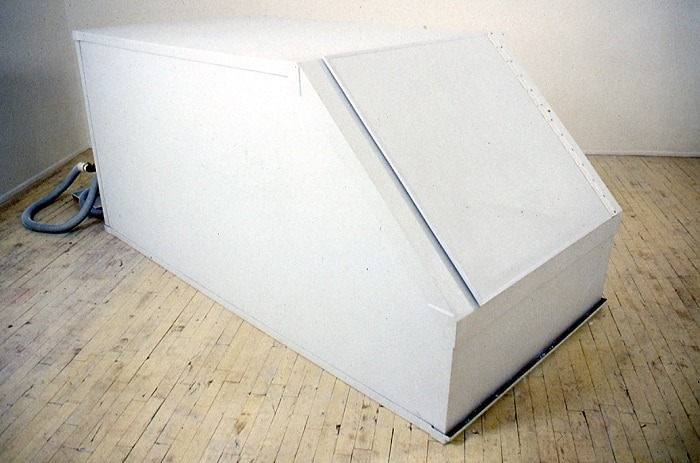 We have all probably worn earmuffs which prevented us from hearing and blindfolds which have prevented us from seeing. We have probably all also experienced being unable to smell and taste, due to a cold or some other illness and clogged nasal passages. Imagine, however, being unable to perceive touch, heat, and gravity.  Sensory deprivation is the deliberate removal of stimuli from one or more of the senses.  Isolation chambers, also called floatation tanks, is a lightless and soundless saltwater tank that models the effects of sensory deprivation in order to complement traditional healing and medicinal methods.  Many believe that sensory deprivation (via isolation chambers), for short periods of time, can be relaxing and even reduce pain and stress. But be careful, if you are deprived of one or more of your senses for too long, it can lead to hallucinations, anxiety, and depression.  So, how exactly how does sensory deprivation via isolation chambers/tanks (or floatation tanks) work, who invented it, and how can you experience sensory deprivation first-hand?  Find out below.

A Little Bit about How Sensory Deprivation Works

It is fairly easy to deprive yourself of sight or hearing; simply close your eyes or plug your ears. It’s more difficult to deprive yourself of the other senses. A sensory deprivation chamber works by eliminating outside stimuli. The chamber is typically dark, sound-proof, scent-less, and with a temperature close to the temperature of a normal human being’s skin. The only noises would be ones you would have to create yourself. Obviously, there is no taste in the tank unless you swallow some of the salty water. There is a sense of almost zero gravity as you float. Supposedly, the removal of outside stimuli allows you to focus completely on the present moment and can be very useful for meditation. However, other research supports the idea that even removal of one of your senses for an extended period of time can lead to hallucinations. Mason OJ. and Brady F. (2009) found that, on rare occasions, even fifteen minutes of almost-total sensory deprivation was enough to lead some participants to have temporary hallucinatory visions such as seeing faces or shapes that were not actually there, a heightened sense of smell, or sensing an “evil” presence in the room.  Most of the research shows, however, that the overwhelming majority of people actually find it relaxing and want to experience it again and again.  Scientific studies have confirmed that there are numerous advantages to (controlled) short-term sensory deprivation via isolation chambers.  These chambers (or isolation tanks) have been shown useful in treating chronic musculoskeletal pain, hypertension, and motion disorders (such as vertigo and headaches).  Some studies have also shown that it can help with insomnia and smoking cessation.  Many people who have tried these floating tanks have also reported being in almost a zen-like and stress-free state immediately after an hour-long session.

John C. Lilly, a neuroscientist, was one of the first people to wonder what would happen if you deprived someone of as much external stimuli as possible. In 1954, Lilly developed the first isolation tank. It was a dark, soundproof tank filled with 160 gallons of water. Everything but the top of participants’ heads would be submerged. They would wear what was called a “black-out mask,” which would eliminate any light from reaching their eyes yet still allow them to breathe. The temperature of the water and the surrounding air was kept at normal skin temperature, about 93 degrees Fahrenheit. The isolation tank was improved later by the addition of salt to the water. This allowed participants to float easily at or near the surface. The “black-out” masks were eliminated in order to make the experience more comfortable. Lilly himself spent long periods of time in the isolation tank exploring the nature of human consciousness. He actually claimed that the deprivation of his senses while in the tank allowed him to contact beings from other dimensions… most people who use the tanks don’t report experiencing anything like this.

There are two basic methods of experiencing sensory deprivation. REST chambers are designed to achieve this. In chamber REST, participants are put into a dark, sound-proof room, where they lie on a bed. Instructions are given for restricted movement, but there are not any physical restraints. Toilet facilities as well as food and drink are placed in the room, to be used at the participant’s discretion. They may stay in the room for up to twenty-four hours, but are able to leave at any time.

The second method of Restricted Environmental Stimulation Therapy is floatation. In this method, participants enter a tank or pool which has been filled with water and Epsom salts and is at body temperature. The concentration of the salt in the water allows participants to float on their backs easily and even fall asleep, as it requires considerable effort to actually turn over.  Float sessions typically last an hour, but you can book shorter or longer experiences.

Flotation REST has proven to be the more popular option for customers, as well as being more effective in eliminating pain and stress. It even works for participants who suffer from claustrophobia, as the lid on the float tank can be left open. The addition of the Epsom salts to the water is great for muscle relaxation as well. Weightlessness, while not experienced in chamber REST, is able to be experienced in floatation REST, adding greatly to the sensory deprivation. REST has even proven effective in helping individuals stop smoking.   Seth Stevenson of Slate spent an hour in a floatation chamber and said that he felt more rested and zen-like than if he had slept “16 hours on a pile of tranquizlied chinchillas.”  He also stated that after getting out of the chamber, colors were saturated and sounds were more vivid.

Many cities today have sensory deprivation tank centers and rates are anywhere from $50 to $100 per hour. If you’re suffering from pain, stressed out and need to relax, or are simply looking for an interesting experience, you might want to consider booking some float time!  If you are thinking of floating, it’s best not to shave the day before or the day of your float, as the salt water can sting irritated skin. It is also recommended that you abstain from caffeine consumption on the day of your scheduled float, as it would make it more difficult for you to relax.