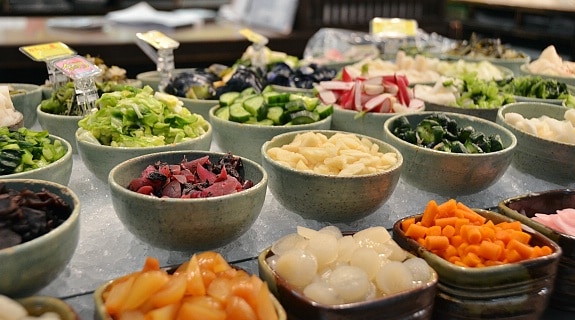 For a long time, one of the world’s largest medical mysteries has been why exactly why the Japanese people are so healthy. On average, Japanese citizens tend to live at least 5 to 10 years longer than most American citizens and the cause could be any number of things. From their diet to all of the incidental and intentional exercise that they get during the day, Japanese people live long healthy lives because of many reasons described below.

Life Expectancy In Japan and Incidence of Chronic Diseases

Many possible reasons could attribute to this, but many assume that it is probably because of the famed “Japanese Diet”. By combining low calorie vegetable and rice meals with a diet heavy in fish and low in dairy and red meat products, the Japanese are capable of getting the proper amount of energy from their food while also minimizing the impact that their diet has on their body.

Not only do they have incredibly high longevity, but Japanese people also generally expect to live out the vast majority of their long lives without ever contracting a serious or debilitating disease or disability.

In addition, Japan has the lowest rate of obesity of any developed country in the entire world at only 3.6 percent of the population. This could be because of the relatively low caloric intake of the average Japanese citizen, a diet that not only lowers their weight but also the extra strain on their hearts and circulatory systems. In fact, these dietary differences between Japan and the West has given the Japanese some of the lowest rates of heart disease, cancer, and strokes in the entire world.

The entirety of Japan may live longer lives than the average citizen of the rest of the world, but there are certain areas of Japan that boast even higher than normal rates of longevity.  These areas often contain people who consistently live active lives well past 100 years of age.

Blue Zones is a concept used to identify a demographic and/or geographic area of the world where people live measurably longer lives. The concept was formulated from demographic work done to identify the first blue zone, Sardinia’s Nuoro province.

Blue Zones exist all over the world.  But one of the more famous ones is actually in Japan, in a place called Okinawa, where the average lifespan is over 110 years.

Okinawa is a place where the elderly live extremely healthy and active lives, relying on plant-based diets and partaking in all sorts of daily physical activities. The tight family and social circles of the Japanese in these areas also provides strong mental support to Okinawans, minimizing any levels of stress that might age them or take a toll on their physical and emotional health.

The Japanese Diet And Lifestyle

The most noticeable and important difference in the lifestyle of the Japanese when compared with that of the West is simply their diet. The Japanese eat lower calorie and lower impact meals than those of American children every single day, and are taught from a young age to treat their bodies with care and respect. Because of their increased consumption of many healthy foods in place of meat or dairy products, the Japanese are much healthier overall than citizens of other countries.

Because Japan is an island, one of the most important parts of many Japanese meals is seafood and fish. Fish is naturally more healthy than red meat as it has lower cholesterol and saturated fat and is less likely to clog arteries. This leads to much lower rates of heart disease, heart attacks, and stroke, which is one of the biggest causes of death in countries like the United States that consume high amounts of red meat. Fish also provides incredibly essential oils to Japanese citizens, which promotes healthy brain function, healthy heart function, and overall improved moods. By eating fish instead of red meat from an early age, the Japanese have much lower rates of both adult and childhood obesity, both causes of death and huge medical bills in the West.

Tea is well known to have lower amounts of caffeine than the coffee that the rest of the world drinks so much of, and also contains a huge variety of other benefits to the body that people may not know about. While coffee may do the trick of providing energy in the morning, tea can do the same and so much more. Rich in antioxidants, green tea before or after a meal is great for fighting off cancer and maintaining digestive health.

Vegetables of all kinds are so important for keeping the body running smoothly, and the Japanese it tons of them. Coupled with steamed seaweed and the fish mentioned before, vegetables are the staple and most abundant food group present in a Japanese diet. It’s not just limited to a handful of vegetables either; mixed steamed vegetables is a Japanese favorite, and the range of different kinds of vegetables that they eat every single day is enormous. At every meal of the day and in gigantic amounts, vegetables like eggplants, bamboo shoots, lettuce, and root vegetables are eaten all over Japan in huge quantities.

It also goes without saying that vegetables are incredibly beneficial for the body. By eating more vegetables, Japanese citizens experience much lower rates of cancer and other diseases that take the lives of millions every year in other countries.

A lesser known but still effective method of improving overall health is to consume fermented foods, a secret that the Japanese know all too well. Known as tsukemono, fermented foods increases shelf life and also improves its overall taste, although the smell is bothersome for the uninitiated.

But the most important value in eating fermented foods is that it allows for good bacteria to grow.  The good bacteria is sometimes referred to as probiotics and helps in controlling inflammation in the body. Recent research has shown that the inflammatory response in the body is partially responsible for many chronic diseases, such as dementia, heart disease, diabetes, depression, and even cancer.  You can read more about the research in David Perlmutter’s book Brain Maker.

Fermented foods is eaten during every meal in Japan.

Here are some important and popular fermented foods in Japan:

One of the most valuable things that the rest of the world could learn from Japan is portion control of all types of meals. The Japanese are known to have much smaller portions than those of other countries, especially countries that struggle with high rates of obesity.

Traditionally, food in Japan is served on small plates and in small bowls which serves the purpose of making the meal look beautiful and also making the portion look larger than it actually is. Because of this, becoming over served is almost never an issue in Japan and caloric intake is much lower than other countries.

Research into the subject has consistently showed that larger plates and portions causes increased overeating and weight gain that can lead to serious health problems, which is something the Japanese don’t need to worry about.

Because of the reduced space in the downtown areas of Japan, many people opt to walk, run, or ride their bikes to school or work instead of driving or sitting on the bus. Because spending more time during the day directly correlates with living a longer life, the Japanese experience many health benefits from simply staying active during their day to day lives. Many Japanese companies also encourage active exercise prior to coming to work, probably because it is shown to increase levels of productivity and workplace satisfaction. When workers have strong mental and physical health, they will be more productive and willing to work, not to mention the health benefits that also help to increase longevity in Japan.

****
Japan is a nation filled with citizens who practice incredibly healthy habits that are beneficial for both the mind and the body. If people in the rest of the world’s countries were to change their dietary and exercise habits to reflect those of the Japanese, death rates would surely plummet while life expectancy across the planet would soar.

By staying active and eating the right foods in proper portions, any citizen of any country can improve their overall health, happiness, and longevity.  But if you want to model and follow the Japanese way of life to live a long and healthy life, do the following:

Why You Should Consider Getting a Standing Desk

30 Drawings That Show Our Unhealthy Addiction to Technology