The Importance of Play for Adults 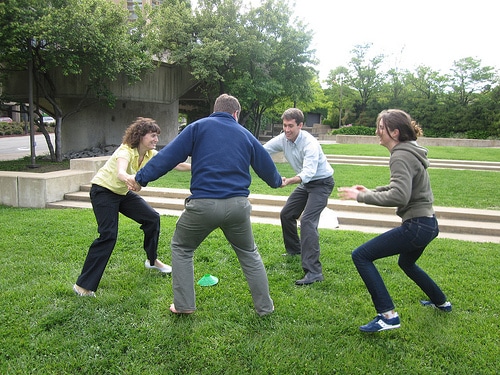 Somewhere along the way when we grew up, we stopped playing.  Playing was an important element of mental, physical, and emotional maturity growing up, whether it be playing kickball, randomly hanging on the monkey bars, or a game of hide-and-seek.  But as we grew older, we played less.  Play is focal to childhood brain development and teach children to adapt to changes, empathy, and communication skills.  But play is also important for adults.

Dr. Stuart Brown from the National Institute of Play defines play is something that is voluntary, pleasurable, “offers a sense of engagement, it takes you out of time” and the act itself “is more important than the outcome.”  Another aspect of play is that it is purposeless.  This sense of purposeless (I think) is a big reason adults don’t play as much.  As adults, we are often busy and have many responsibilities.  As such, we think that almost everything we do should have a purpose.  If there is no purpose, why should we take time out of our busy schedule to do it?  Or so we think.

But this purposeless activity has heaps of benefits.  Psychiatrist Stuart Brown found that play helped couples rekindle relationship and helped inmates in prison stay out of trouble.  This is because play is a huge form of stress relief.  Research also shows that adult play is important in helping maintain social well-being.  After all, humans are unequivocally social creatures; we are made to socialize and communicate with others.

While play is often referred to as a physical activity, play doesn’t have to be exclusively physical.  Playing Monopoly or chess with your friend is also considered play and non-physical play also important in helping us maintain and improve our well-being.

Play As a Substitute For Exercise

Changing the mindset of what constitutes exercise is important.  Exercise doesn’t have to be at the gym or with weights.  Exercise is any form of physical exertion.  Whether you are dancing to your favorite tunes, practicing handstands, wrestling with your friends, or playing around with your dog, it’s all a form of exercise because you exert yourself physically.  But these activities are also a form of play—because they are fun, pleasurable, and often just purposeless.  In the state of play, we are only focused on the experience.

Exercise is often daunting and monotonous.  But play isn’t.  Instead play makes us happy, and makes burning calories joyful.  Depending on the type of physical play, it also improves our sense of balance and proprioception.  For me, playing is grappling.  Grappling no longer seems like exercise to me.  To me, it’s play.

By Mark Willigerod
About the author