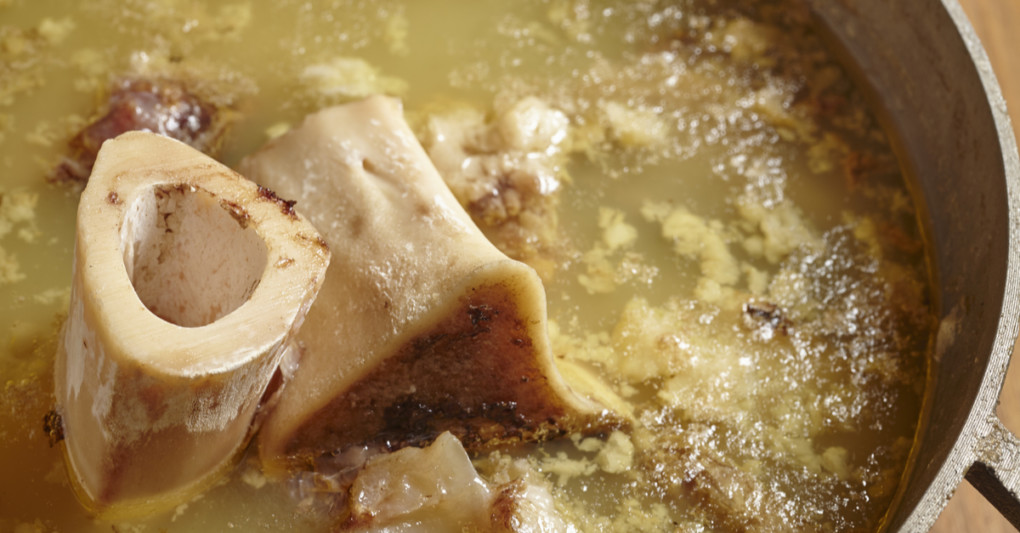 Bone broth has become all the rage in recent years. If you are a vegetarian, you’ve probably skipped this food fad, as bone broth is exactly what it sounds like: Broth made from bones.

In fact, bone broth is more than just about the bones, it’s about the lengthy time those bones are kept simmering in the pot. While some commercial bone broths boast of a mere eight-hour process of slow-simmering, home bone broth recipes might call for 48 hours in the pot.

Bone broth might seem gross to some – after all, part of the reason why the bones are simmered so long is to extract collagen and gelatin. But many people swear by its health benefits.

Bone broth, which used to be almost impossible to find beyond the local health food store, is now practically ubiquitous.

In fact, even Walmart offers its own “organic bone broth” in varieties of chicken, beef, and low-sodium under it’s “Sam’s Choice” brand name. (They even have an average rating of 4.5 stars on the Walmart website.)

To read about bone broth in some blogs, you’d think it was the Fountain of Youth or some sort of ambrosia from heaven. It’s common for bloggers to wax on about how fabulous bone broth is.

“This stuff is awesome. Never in my life did I imagine I’d be so head over heels about a soup made from bones,” writes Sean Croxton for UndergroundWellness.com. “I guess you can say I have quite the man crush on the rich, brown liquid that fills my coffee cup each morning.”

Bone broth is credited for any number of positive health benefits, including:

To obtain these health benefits, many bone broth boosters drink a cup of it daily.

Certainly, drinking bone broth daily won’t harm you. The broth may still have some health benefits. But some researchers question the hype that makes bone broth into something slightly short of a miracle cure-all.

According to Medical Daily, the clinical evidence simply does not indicate that bone broth offers more health benefits than standard broth. Bones will lose nutrients as they are cooked, and the much-hyped gelatin and collagen won’t perform any magic tricks in the body once consumed.

On the positive, the same health benefits of chicken broth are found in chicken bone broth. Chicken broth has anti-inflammatory properties and it helps the immune system.

Bone broth also contains nutrients as well as potassium that make it a great “post-workout drink.”

Home-Made Bone Broth May Be the Best

Now, some fans of bone broth will contend that home-made broths are better than store-bought ones. This is likely true. Store-bought broths may also contain added sugar and salt. So, if you like bone broth, it might be best to make your own – that is, if you have time to simmer bones for 24-48 hours.