Science has shown that when your brain initially puts information in long-term memory, you need to revisit it a few times to increase the chances you’ll later be able to find it when you need it.  This is the basis of the Forgetting Curve, an idea first postulated by Hermann Ebbinghaus.  The aforementioned curve represents memory retention as a function of time.  As more time passes by after initially learning something, the more is forgotten without revisiting the information.  That is why it is common for people to almost remember nothing after pulling an all-nighter to cram last minute.

In order to better retain information for recall later on when the time calls for it, such as a test, you need to use a technique called spaced repetition, or spaced learning.  Spaced repetition mitigates the effects of the Forgetting Curve.  As you may have guessed, spaced repetition involves repeating what you are trying to retain—like a new math equation, the sentence structure of a foreign language, a new vocabulary word, or a new jiu jitsu move—over a period several days/weeks.  Research has shown that repeating something twenty times over the course of one day is less effective than repeating something ten times over the course of a week.  This is because the brain needs time to form the synaptic structure and connections surrounding the new information before it is consolidated into long-term memory.

Now that we know a little bit about what spaced repetition is, let’s go into why we need it and how to do it.

The Forgetting Curve is a hypothesis about how much information we can retain as a function of time.  The hypothesis states that we would have forgotten 90 percent of what we have learned within three days.  That is why review within the first 24 hours of initially taking in the information is so important.  But as you can see from the graph below, every time we recall and review the material, we forget less and less (as illustrated by the green line on the chart. 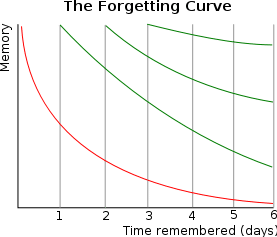 Once it is ingrained in the long-term memory bank, our brain will start to consolidate the information into separate chunks.  When we form these chunks, our ability to understand the bigger picture and connect different concepts is much greater.

How to Use Spaced Repetition

It is extremely important that you do an initial review of new material within a day of learning it, and then thereafter reviewing it a few more times.  By quickly reviewing the material a day after you first learn it strengthens the mental pattern of the retained information, allowing it to stay in your memory bank instead of quickly fading away.  As you quickly review material using spaced repetition, the pieces of information you retain starts to become chunks, instead of separate pieces of information, thereby allowing you to conceptualize and connect concepts and principles better.  To better understand spaced repetition and how to put it to practice, here is a 4 step guide to using spaced repetition:

1. Within 20-24 hours of initially taking in new information, review the notes that you originally took.  When reviewing your notes, look away from the notes after a quick glance and try to recall the important points.  There is a difference rereading and recalling.  Rereading the material does not form as good of a memory as trying to recall the material from memory.

2. Within a day after the first review (step 1), try to quickly recall the information without relying on the notes as much.  Try to recall the information when taking a walk, or just simply sitting down.  You can increase the efficiency by making note cards (or flash cards) of main ideas and then quickly testing yourself of the concepts.

3. After step 2, try to quickly recall the material every 24-36 hours for the next several days.  These recalls do not have to be lengthy, they can be quick recall of the material while walking to class or eating.  You can also try to look at your notes again quickly during this stage and try to practice recall while working with your notes.  While trying to recall the ideas, it is a great idea to recall it in a quiz/test format, meaning you should ask yourself questions to see if you can can come up with the answer.  This is where using flash cards is going to be important because you can just put the answer on the back side.

4. Then several days before the big test, take out the material and begin recalling and studying it again.  The rule of thumb for any big test is to study one week out.  This way, you are able to reconsolidate the information if need be and give your brain time to (re)process the concepts.

Tip #1: Research has shown that it can be especially useful to review material shortly before you go to sleep.  Sleep is the time when your brain is working hard to try t sort and consolidate all the information you have taken in throughout the day, sorting out what’s important and what’s not.

Tip #3: This method of spaced repetition and recall will help you learn better and retain much more information than just studying the material once  and then using the last couple of days before a test to stay up all night to retain the information.

Tip #5: In addition to repeating the ideas in your head, the ideas must have some type of meaning to you if you are to store it in your permanent memory bank.  This means that in addition to repeating it in spaced intervals, you must also associate the learned material to an already established association in your brain.  This can be done with memory devices (such as a memory palace or mnemonic device) or by establishing the connection between the new idea you are trying to learn and an old idea that you already understand well.

Tip #6: When learning new material, it is helpful to use multiple modalities of learning by writing the idea down using hand-writing, saying it out loud, and using your imagination to turn the idea into something memorable (such a a mnemonic device or a memorable visual).

For more tips and tricks on how to study, go to our education and learning section.