The Importance of Gratitude to Happiness

Personal Development
The Best of Examined Existence
By 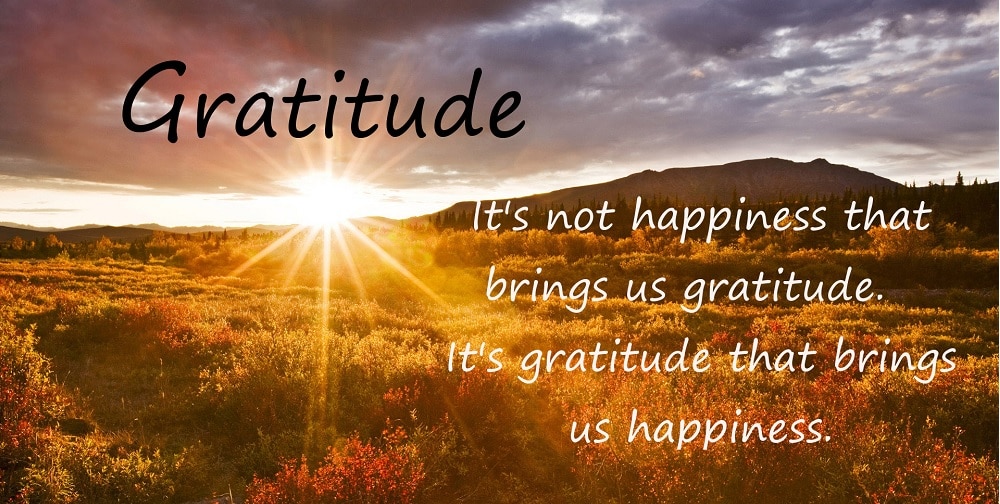 For centuries, the concept of gratitude has always been associated with religion and moral philosophy. It was only recently that this natural emotion stirred up the interest of researchers largely during the advent of positive psychology, a new branch of cognitive psychology that focuses on the positive aspects of the human psyche. Positive psychology aims to develop and nurture the affirmative aspects of human behavior through scientific studies and effective intervention methods to achieve emotional fulfillment in individuals. Gratitude has been found to be one of the strongest positive emotions and is very often linked to happiness – the ultimate state of well-being that every human being strives to pursue.

Anyone who wishes to define happiness would almost always end up with one very common description: it is something everyone wants to attain. As they say, the purpose of life is to be happy. You’ve heard the same line time and again, and at some point, you may have felt that it is, indeed, true. This perception has made the word ‘happiness’ quite difficult to define. Simply put, it is just an emotional or psychological state but the meaning of happiness can greatly vary depending on the context, situation, or even the intensity of the emotion which variably ranges from silent contentment to euphoric bliss. Various approaches have been used in an attempt to accurately define happiness. Researchers believe that happiness can only be fully understood and studied if it has an explicit definition. So far, the term “well-being” is the closest we can get to justify the rush of positive emotions whenever something good happens. According to Ed Diener, a notable psychologist on his works about happiness, the term “subjective well-being” is having less negative and more positive emotions. Furthermore, subjective well-being is all about a person’s momentary or long-term evaluation of his life and the feelings of joy, satisfaction and fulfillment that result from this evaluation.

Sonja Lyubomirsky, a positive psychologist from the University of California, Riverside, successfully demonstrated through scientific research that gratitude can increase the likelihood of a person to become happier. Her research also showed that exuding the trait of gratitude brings a lot of positive emotions such as being energetic and helpful, more hopeful, forgiving and empathetic, and less depressed or resentful. Grateful people also become more inclined to religion and spirituality.

In an experiment about gratefulness, participants were divided into two groups. The first group was made to list down a maximum of five reasons that make one grateful, while the other listed down five annoying or bothersome reasons once a week over a course of ten weeks. In the results, the participants in the group expressing gratitude felt more content and positive about their lives. As a matter of fact, they also showed improved health signs through a lower number of symptomatic ailments such as nausea, headaches, cough and even occurrence of acne.

Gratitude is an important trait to subjective well-being.

Positive psychology has opened doors to the study of various optimistic traits that generally help a community thrive. Recently, the trait of gratefulness has proven itself worthy of attention and further investigation. While gratitude means different things to different people, it is undoubtedly a very likable and highly-valued trait. These were shown in a study conducted by Dumas, Johnson and Lynch (2002) called Likableness, Familiarity and Frequency of 844 Non-Descriptive Words. In this study, the word “grateful” was classified among the top 4% of likable traits. On the contrary, the word “ungrateful” was at 1.7% lowest, earning the mark as one of the least likable and negative traits.

In 2003, a team from Eastern Washington University led by Philip C. Watkins published a series of studies that developed a consistent and valid measure for gratitude as a trait, and to assess the relationship between subjective well-being and gratitude. The research study, Gratitude and Happiness: Development of a Measure of Gratitude, and Relationships with Subjective Well-Being, used the Gratitude Resentment and Appreciation Test (GRAT) which is a method used to quantify dispositional gratitude. This measure was developed through a theorized account of characteristics of grateful individuals.

Watkins and his team identified four characteristics found in people who demonstrate gratitude:

Gratitude fosters and enhances happiness and other positive emotions.

Watkins and his team believed that gratitude, in terms of experiences and expressions, foster subjective well-being. Thus, grateful people are expected to show and feel more happiness as well. Four studies were conducted to develop the measure called GRAT. Along the course of their studies, Watkins and his team were able to prove the validity and consistency of GRAT as a psychometric tool in the measurement of gratitude. The studies also revealed strong relationships and a positive correlation between temperamental gratitude and subjective well-being and happiness.

In another publication conducted by Emmons and McCullough in 2003 that entailed a long-term investigation of emotional traits, it was found that gratitude, when practiced on a daily basis, increased the frequency count of other positive affects including subjective well-being and hope, and decreased the frequency of affect variables in the negative grouping.

Gratitude reaps a lot of physical and social benefits.

A well-known expert on the scientific approach to gratitude is Dr. Robert Emmons from the University of California, Davis. Results of his numerous studies on the practices of gratitude consistently report a range of benefits in various aspects:

As we all struggle to get hold of the good life, happiness is the motivation, explanation and measure of the things that we tend to pursue. Gratitude is indeed important as it fosters not only the appreciation of the simple pleasures but more importantly, it brings about a handful of benefits that ultimately leads to well-being and well-roundedness. Practicing gratitude on a daily basis is definitely worth taking. After all, happiness is not merely an option; it is an unalienable right, too.