Initially known as the “four stages for learning any new skill,” the 4 States of competence was a learning model originally introduced by Noel Burch, an employee of Gordon Training International. First drafted in the 1970s, this “conscious competence” learning model is described as the psychological states that are involved in transforming skill incompetence to competence or outright mastery. 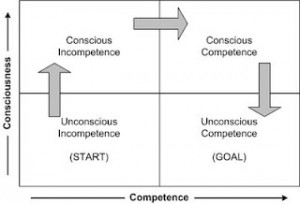 The 4 States of Competence is a model that describes the processes one gos through as he learns a new skill. It shows that humans are originally oblivious of their incompetence. Once they are aware of their ineptitude, they try to develop a skill that they can utilize along the way. As time progresses, this acquired skill is effectively used without conscious contemplation. It is in this stage when a human develops mastery – also known as unconscious competence.

The 4 States of Competence is said to be patterned after the works of Abraham Maslow, although it has not been mentioned in any of his publications. It is sometimes likened to Johari’s window. However, it deals with self-awareness, while the 4 states of competence cover the learning process.

The 4 States of Competence Explained

The journey from not knowing to fluid competence is detailed in the following steps:

Before an individual undertakes an activity that is novel to him, he trudges through the state of unconscious incompetence. During this stage, an individual lacks the skills, knowledge and capacity to do a certain skill excellently.

The stage of unconscious incompetence can linger for years. In order to learn a new skill, it is important for a person to recognize his inability in order to perform a skill perfectly. The burden of informing the pupil about his wrongdoings lies on the teacher – or an expert in the said skill.

An example of unconscious incompetence is this: you are in your yoga class and the instructor asks you to execute the “Lord of the Dance” pose. You try to do it – and you look like a sick praying mantis – but you continue with it anyway because you do not know that you are doing it all wrong. The instructor then tells you that you are executing the pose incorrectly. The acknowledgement of this mistake then paves the way for the second stage of competence, which is…

The second stage of proficiency, the phase of conscious incompetence starts when you develop consciousness about the things you do not know. In this state, you plant yourself with hopes and aspirations.

Most view stage 2 as the most uncomfortable phase, because you recognize the fact that you are a failure in a certain activity. The only difference it has with stage 1 is that you do not pursue the thing you ‘suck at.’ (Shame and acknowledgement of your shortcomings can be attributed to this.)

While this can be embarrassing, the acknowledgement of your incompetence prods you to move and train – so you can be competent in it, eventually.

Just like stage 1, you might linger in stage 2 for a prolonged period of time. The duration of your stay in the conscious incompetence stage depends on your learning determination, as well as the acceptance and acknowledgment of your incompetence.

The most important hallmark of this stage is your ability to perceive and recognize the keys to competency – ones that are exhibited by other more capable individuals.

Continuing with the example of stage 1, you know you have reached the stage of unconscious incompetence when you see yourself in the mirror and realize that you have been doing the pose wrong. Because you are conscious of your wrongdoings, you try to undertake measures that can help you improve your pose.

“I grow and know and it starts to show.”

Slowly taking over the role of the facilitator, an individual lodged in the third stage begins the adventure towards utmost competency. A consciously competent individual dedicates himself in the improvement of the craft by undertaking repeated practice, participation and formal training of the said skill.

Proceeding with the example, you know you arrive at stage 3 or conscious competence when you engage in activities that will help you perfect the pose. This can include practicing at home, watching video streams of yoga, or spending more time at yoga class.

“I simply go because of what I know.”

As you build experience and expertise, you reach the stage of unconscious competence – wherein you do not have to think about the activity you are very good in.

As an unconsciously competent person, you are summoned because of what you know. You deem it to ‘feel right,’ that is why you go ahead with the activity. You prove to be good at it – without exerting too much effort.

Example: Unconscious competence or mastery means that you have finally reached the pinnacle of the skill. Thanks to your dedication in learning and perfecting the yoga pose, you can finally do it without much thinking or contemplation. You can accomplish the “Lord of the Dance Pose” perfectly in as simple as 1-2-3. And because you do not have to dwell too much when performing this pose, you just continue with the skill because it feels good and right.

While this is not included in Burch’s original model, many experts are campaigning for the inclusion of this fifth stage. In this phase, a ‘master’ can influence other persons to develop unconscious incompetence. This ability paves the way for the learning of new skills in people who are otherwise deemed ‘incompetent’ of the said skill.

Learning a new skill might be a hard task – but you can eventually do it! By acknowledging the states of competence – especially the ones you are in – you can perfect a certain activity after a few trainings. Isn’t it nice to know that there is a formula to gaining a skill and becoming competent at it? Whenever we explore a new area of our lives that we’re unfamiliar with, we require a step-by-step process to become acquainted with it. It’s almost like we need to hold somebody’s hand to get through it. That’s exactly what the 5 stages do. Not only do they show you how the process of being incompetent to becoming competent works, but they show you what to do.

How the Brain Learns by David Sousa

The First 20 Hours: How to Learn Anything FAST! by Josh Kaufman

How to Learn Anything Quickly by Ricki Linksman

Although this article informs you of the four states of competence, it doesn’t mean that the conversation ends there. This article is meant to inform you but also get you to take action so that you can update us with how these stages helped you. Let us know your experience of using the four states of competence and don’t hesitate to ask questions or voice your concerns.