In the classroom and at work, doodling is frowned upon.  The underlying assumption when doodle is that they are not paying attention.  But studies as of late have come to the support of doodlers—and provides proof that doodling is much more than just a product of a wandering mind.  In actuality, doodling is not the mind daydreaming, but rather a way to force the mind to stay in the present.  Not only is doodling not counterproductive, but science has found that doodling actually has many benefits to the doodler.  What are the many benefits exactly?  Below are four scientifically verified benefits of doodling. 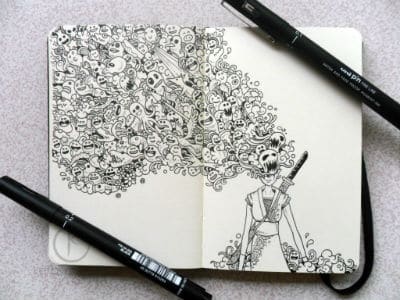 In the book GameStorming: A Plaubook for Rule-breakers, Innovators, and Changemakers Sunni Brown talks about doodling’s ability to enhance creativity.  The reason behind this is that doodling uses three additional learning modalities in our brains.  The three modalities are:

The process of doodling helps us remember things better because it brings the information currently being absorbed into a more saturated and sensory experience, allowing a clearer picture of the facts in our memory bank.

Doodling improves your focus and concentration

Often people think that doodlers are daydreaming, with the mind wandering off somewhere.  However, it has been found that the act of doodling actually reinforces the brain to pay attention instead of drifting off.  This was proven by the above study by Professor Jackie Andrade.

Sunni Brown states that the act of doodling itself, drawing shapes and symbols, actually forces the mind to slow down and focus on the present.

According to philosopher Jesse Prinz, who is a professor at City University of New York, doodling helps you hit the sweet spot in your brain, the spot where you are paying close attention but you are not overthinking things.

Sometimes when we are too focused on something, we overthink things, especially the little details that often don’t matter.  As a result of focusing on the small details, we fail to see the big picture.  By doodling, we don’t pay as much attention to the small details of the information we absorb.  Instead, we tend to focus on overarching ideas, which are paramount to seeing the big picture.