Your mind is a force to be reckoned with. How you use it can either make you or break you. Believing in one thing can prevent you from reaching your full potential, while believing in another can push you toward becoming the person you’ve always wanted to be. It’s all a matter of perspective. In this article, we will talk about the two different types of mindsets that can make a world of difference in our lives.

One of the most basic beliefs people carry about themselves has something to do with how they view and inhabit what they consider to be their personality, says Stanford psychologist Carol Dweck in her most famous work, Mindset: The New Psychology of Success. In other words, what we think and how we think fuel our behavior and predict our success.

A “fixed intelligence mindset,” according to Dweck, holds on to the belief that a person’s intelligence, character, and creativity are all static givens that they can change, and that the affirmation of that inherent intelligence is success. To carry on the sense of being smart or skilled in a fixed mindset, one must strive for success and avoid failure at all costs.

On the contrary, a “growth intelligence mindset” seeks challenge and believes that failure is not a proof of unintelligence but an encouraging springboard for growth and development. In her two decades of research, Dweck discovered that the view you choose to embrace for yourself deeply affects how you live your life, determining whether you become who you want to be and whether you achieve what you value.

When you choose to believe that your personality and skills are carved in stone during early childhood, this creates an endless need to prove yourself again and again. If you possess only a specific amount of intelligence, a specific personality, and a specific moral character, then you will need to show the world that you have a lot to offer. However, if you choose to believe that these attributes are not simply something you’ve been given and forced to live with, you will cultivate them through your efforts to reach your full potential.

In the illustration below (courtesy of Brain Pickings), we see the the main differences between a fixed mindset and a growth mindset: 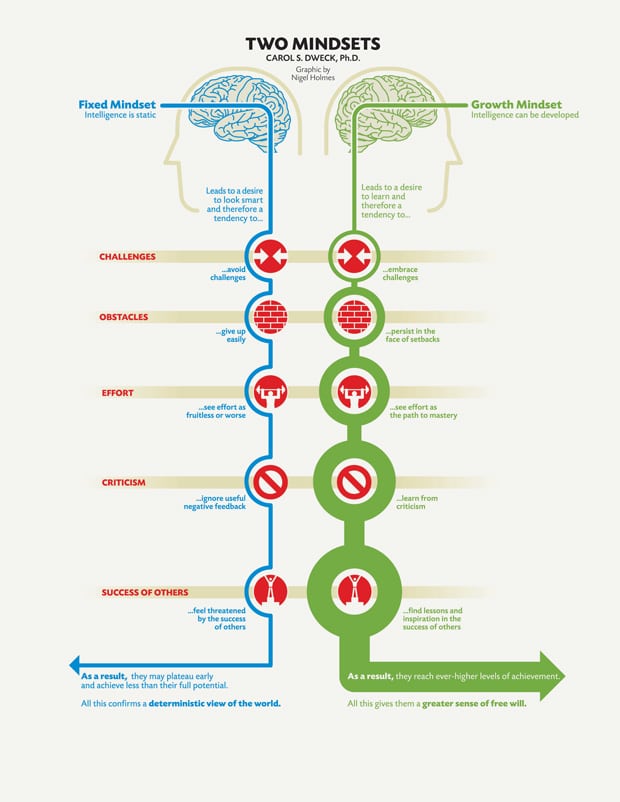 How Your Mindset Affects Your Academic Achievement

Dweck and her colleagues, in one seminal study, brought several subjects into Columbia’s brain-wave lab to discover their brains behavior upon answering a set of difficult questions and receiving feedback. The results showed that those with a fixed mindset showed interest only in hearing feedback that directly reflected on their existing ability, and they tuned out information that could help them learn and improve. They weren’t even interested in hearing the right answer when they’d gotten a question wrong, already filing the result away in the failure category. Those with a growth mindset, on the contrary, were eager to absorb information that could increase their present knowledge and skill. This is to say that their main concern was to learn, not whether they managed to get the answers right.

In another study involving hundreds of adolescent students, Dweck and her colleagues gave each person ten moderately challenging problems out of a nonverbal IQ test, and then commended the student for his or her performance. However, they offered two types of praise—some their for ability and others for their effort. Praising the students for their ability pushed them right into the fixed mindset, showing all signs of it in the next step of the procedure. When the researchers offered them a choice, they refused to undergo a challenging new task they could learn from. They rejected anything that could possibly expose their weaknesses and call their talent into question. In contrast, 90 percent of the students praised for their effort wanted to take the challenging new task they could learn from.

For people with a growth mindset, personal success occurs when they work as hard as they can to be their best, whereas for those with a fixed mindset, success is all about building their superiority over others. For the former, setbacks are motivating and informative input they can use to become better. For the latter, they’re a label and a sentence.

How Your Mindset Affects Your Relationships

One of the most radical applications involving the fixed and growth mindsets has nothing to do with business and education but rather on love. Dweck discovered that the subjects manifested identical dichotomy of dispositions in their personal relationships. People harboring a fixed mindset held on to the belief that their ideal mate would set them on a pedestal and make them feel perfect. However, those possessing a growth mindset would opt for a partner that would point out their flaws and lovingly help them improve as a person. They preferred someone who would motivate them to learn new things and become a better person. Apparently, the fixed mindset is the foundation of today’s most destructive cultural myths concerning “true love.”

Naturally, people with a fixed mindset expect everything good to happen immediately. In their minds, they see the ideal as instant, perfect, and perpetual compatibility. However, people with a growth mindset believe that everything can be improved and developed. When people with a fixed mindset discuss on their conflicts, they point fingers, blaming themselves at times, but more often blaming their partner. Those with a growth mindset, on the contrary, have the ability to recognize their partner’s imperfections without pointing any fingers, and still have a fulfilling relationship.

What it all boils down to is that a mindset is a psychological process that interprets the things going on in our environment. In the fixed mindset, that process is assessed by an internal monologue of constant evaluation and judgment, and constant a hunger for approval. In the growth mindset, however, the internal monologue is one that appeals to a passion for learning, constantly searching for the kind of input that can be metabolized into deeper learning and constructive action.

Entering a mindset means entering a new world. In the world of fixed attributes, success is about establishing that you’re smart and gifted. In the world of changing traits, however, it’s about developing yourself to become a better person. Knowledge and skill are not things that you are born with but things that you can cultivate. You have the ability to become more intelligent, more artistic, more athletic, and more successful simply by focusing on the process, not the outcome. The daily choices you make will influence what you believe and the person you will become. It’s not about the result—it’s about becoming the type of person who gets to enjoy those results.

If you are interested in reading Carol Dweck’s groundbreaking book, you can get it from Amazon.