We previously talked about grit on this site and how it is important to have in order to succeed in life.  In the video below, we see Angela Duckworth give a presentation at a TED talk, in which her claims is that grit (and not intelligence) is the most important factor in determining future success.  In her experiment, she found that naturally gifted spellers initially did better on spelling tests.  However, those who had grit, or perseverance, were the ones who were able to advance to the later rounds in spelling bees.  This chart is taken from her research paper. 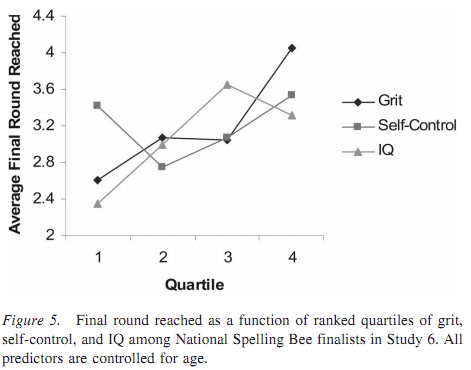 Anyway, watch her video below to listen to her fascinating talk on why grit is the most important trait for success.