Why Standing Desks Are Good For Your Health 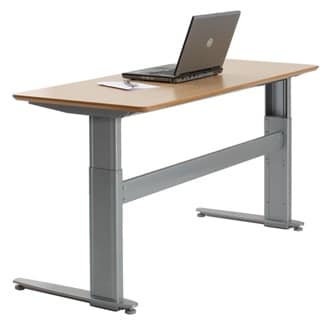 It is common knowledge that a sedentary lifestyle brings about a litany of health risks. Yet not many people know that it actually can pose equally serious health repercussions even for those who are physically active yet still sitting for prolonged periods at work or at home. Research has shown the alarming effects of sitting for most of the day.  This explains the recent surge in the demand for standing desks. If you need convincing for why you should pick a standing desk, check out the specific health reasons below.

James Levine, an endocrinologist at the Mayo Clinic, conducted a research to answer the age-old health question: why some people gain weight but others don’t. He and his fellow researchers investigated a group of office workers who performed minimal exercise and placed them all on an identical diet plan that contained a thousand more calories that they usually consumed. Subjects were asked to refrain from changing their exercise habits. Yet despite the standardized diet and exercise regimens, some of the subjects gained weight, while others maintained their weight.

Eventually, subjects were asked to use underwear stitched with sensors to measure every subtle movement they make. Researchers discovered that those who weren’t gaining weight were those who actually got up and walked around, on an average of 2.25 more hours per day, albeit all of them were sitting at work, and none of them was hitting the gym.

Not grabbing the opportunity for constant movement, as it turns out, is closely linked with obesity. And research suggests that conventional exercise strategy, such as sitting all day at work, then hitting the gym or going for a run, makes scarcely more sense than the notion that you could counter a pack-a-day smoking habit by jogging, according to James Vlashos in the New York Times. The key to reducing the risk of obesity is consistent, moderate levels of movement throughout the day.

Scientists are currently investigating why this might be the case. The lesser amount of calories burned when sitting (a 2013 study found that people who stand burn, on average, 50 more calories per hour) is conspicuously involved; however, there may also be certain metabolic factors at play, such as that the body’s cells are becoming less responsive to insulin, or sedentary muscles are releasing lower levels of the enzyme lipoprotein lipase. All this specifically magnifies the risks of sitting for prolonged periods, not exactly the same as the benefit of standing. But Levine asserts the fact that the two are closely related.

The detrimental health impacts of sitting—and the benefits of standing—appear to go beyond simple obesity. Some of the same studies by Levine and others have found that sitting too much is linked to reduced effectiveness in regulating levels of glucose in the bloodstream, part of a condition known as metabolic syndrome that dramatically increases the chance of type 2 diabetes.

For instance, a 2008 study showed that people who sit for longer periods during their day are likely to have higher levels of fasting blood glucose, indicating their their cells are less responsive to insulin, with the hormone being unable to trigger the absorption of glucose from the blood. A 2013 study yielded similar findings, and deduced that, for people who are already at risk of developing type 2 diabetes, the amount of time spent sitting could pose a greater risk  than the amount of time spent vigorously exercising.

Contrary to popular belief, sitting’s harmful effects to heart health is not new knowledge. In fact, British researchers have noticed the correlation between the two in as early as the 1930’s. They have obtained such observations by studying the health of bus drivers and conductors. Results showed that bus drivers who sat for most of the time experienced more heart attacks (and other related cardiovascular problems,) compared to bus conductors who stood for most of the daily trips.

With this finding, more and more scientists have conducted researches in order to further explore the link between sitting and cardiovascular disease. One such study features adults who sat for two hours or more every day. The results show that these people are 125 times more likely to suffer from heart disease, heart attack, and chest pain.

On the other hand, another study showed that men who did not get enough exercise and sat for more than five hours per day outside work have twice as much risk to heart failure. The rates are staggering in comparison to men who exercise regularly and do not sit for more than two hours outside the office.

Even with modifications made to exercise, those who sat a lot are still 34 times more likely to suffer from cardiovascular failure, in contrast to those who are mobile.

Although cancer is highly associated with exposure to radiation and carcinogenic substances, researches show that prolonged sitting can lead to the development of several malignancies as well.

Such cancers (the breast and the colon) are believed to be influenced by a sedentary lifestyle. In line with this, a 2011 study suggests that prolonged sitting is the culprit behind as much as 49,000 breast cancer cases and 43,000 colon cancer cases. Prolonged sitting is also to blame for the following statistics:

The link between prolonged sitting and malignancy is still unknown, but experts have found that C-reactive protein and other biomarkers are higher in people who sit a lot. These biomarkers, scientists believe, lead to cancer development.

5) Reduce Strain of the Back and Neck

It is estimated that up to 80 percent of the population will have back and neck problems at least once.  But for many, the problem will occur more than once.  To some, it is a chronic problem that will never go away.

Although there are many causes for back and neck pain, prolonged sitting with incorrect posture is one of the major causes.  If you already experience back and/or neck pain or are looking to reduce pain, standing while working may be a great option for you.  Standing will straighten your posture and avoid the strain that sitting puts on your back and neck.

Because of advances in technology, we are sitting more now than ever.  Sitting has contributed to a wealth of health problems, including but not limited to heart disease, obesity, and cancer.  That is why we at Examined Existence strongly urge those who work behind a desk all day to at least stand for half of the working day.  Doing so will improve your health immensely.

The advantages of standing desks (or sit-stand desks) enormously outweigh the discomfort you may initially feel standing while working.  That discomfort will go away.  And remember, sit-stand desks have an option to sit adjust to a sitting position when your legs are too tired and you no longer want to stand.  If you are interested in buying a standing desk, check out our  review of the best standing desks currently available on Amazon.