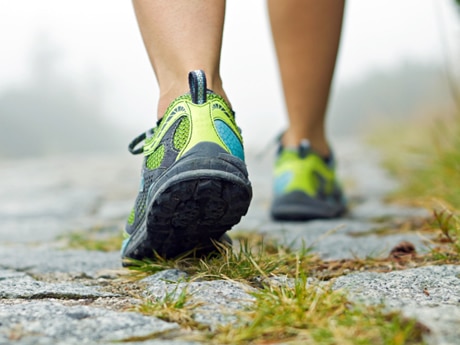 A lot of healthy professionals recommend we walk 10,000 steps a day to stay physically healthy.  Well, apparently walking brings about more benefits than just staying healthy.  A recent Stanford study found that walking also increases creativity.  This study lends more credence to the mounting evidence that sitting all day is really bad for you—and that you should either at least stand for a good chunk of your working day or take walks often throughout the day.

Previous research has found that exercise has neuroprotective qualities and aids in protecting the brain from damage.  But this study shows that creative thinking actually improves while someone is walking or shortly thereafter.  This study specifically wanted to find out what non-aerobic (read, very slow) walking did for the brain in terms of generating novel and creative ideas.  The study found that a person walking, either indoors on a treadmill facing a blank wall or walking outside with nature, produced twice the amount of creative responses as a person who remained sedentary by sitting down.

The original hypothesis was that walking outside would yield the biggest benefits and walking on the treadmill inside would yield very little benefit in comparison.  However, the study showed that both scenarios presented the same amount of increased creativity when compared to the baseline (a person sitting).

The study included 176 college students and other adults.  The participants were given tests commonly used to assess creative thinking ability.  All participants were placed in three different conditions prior to being tested; walking on a treadmill prior, walking outside prior, and being pushed in a wheelchair outside prior.  Three of the tests given were “divergent thinking” tests, a test to gauge how well respondents can generate ideas by exploring a plethora of possibilities.  With these tests, the researchers were looking for novel and creative solutions to problem sets.  A novel and creative solution is when no one else in the study has given the same solution.  However, the solution has to make sense and fit within the context of the problem.

Another experiment with the 176 respondents tried to test the ability of the subjects to come up with analogies to prompt phrases.  A response is considered creative when it captures the true underlying essence of the prompt.  For instance, a creative response to “a robbed safe” would be “a soldier suffering from ptsd” as it captures a sense of loss and violation that the prompt conveys.  A response like “a lost key” would not be considered creative to this prompt.  In this test, respondents were 50 percent more creative when walking.

Although this study does not show that walking is the be-all-end-all solution for cognitive enhancement, it does show that walking does improve one’s ability to creatively think about information.  It can definitely be a starting point for anything you do that might require some sort of creativity.  In addition, walking has many benefits, such as weight loss, relief of back/neck pain, and improved cardiovascular health.  Thus, walking should be an integral part of your everyday schedule.

If you find that you are sitting most of the day at work, you might want to invest in a standing desk or a treadmill desk.  There are many benefits to not sitting all day.  If you are interested, we have reviewed the best standing desks and the best treadmill desks available on the market.

Ten Ways to Boost Your Creativity

The Ideal Way to Set Up Your Standing Desk

Focused Mode Versus Diffused Mode of Thinking: Why You Need Both

Use a Standing Desk to Treat Back, Neck, and Shoulder Pain