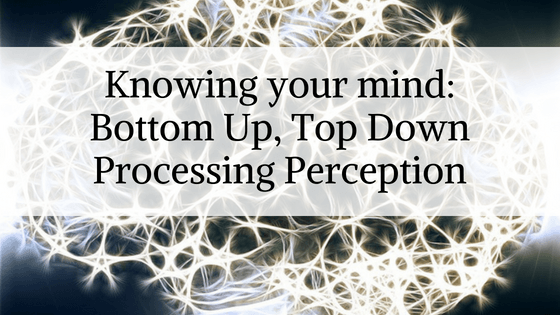 There are two ways people perceive the world, through bottom-up or top down processing. Learn about bottom-up processing and how its applied in the real world.

A human’s senses help them perceive the world around them. By helping to identify sounds, smells, taste, what we see, and physically feel. While the brain can process these senses individually, a person’s perception can use them as clues to identify them as a whole concept.

For instance, if you smell bread baking and see loaves of bread in a store window, then you might conclude that you’re in front of a bakery. This type of perception is called bottom-up processing, which is one of the two types of perception in humans. The other type is top down processing.

Bottom Up Vs. Top Down Processing

The easiest way to explain these two types of perception is processing things bottom-up refers to sensory perception. It is using the senses, whether they are taste, touch, sight, smell or hearing, to understand information and process it in the brain.

Top down processing involves cognition. The knowledge you have allows the brain to perceive something based on what it knows and what it sees to understand it. For instance, if you receive a text that reads: “C U L8r,” you can still read and interpret it as “see you later” based on what you already know.

Everything we perceive begins with the bottom-up approach because it is based on our senses.

Without being able to see the text, we wouldn’t know what it says.

However, if you can see it, then your brain can interpret it based on things you’ve learned. If a blind person has a smartphone that reads text messages as they are received. Then their hearing allows them to be able to interpret the message.

Most people draw conclusions based on what they perceive with their senses.

For instance, if you’re alone in your house and you hear a strange noise, you may think someone is trying to break into your home.

If you decide to investigate the noise instead of panicking and find a box of cat food on the floor near the kitchen counter. Then you may conclude that your cat knocked it down after smelling the food.

When the senses perceive something, it stimulates the brain. Which will react with emotions to what it senses. So, if you see the cat food on the floor, you might get mad at your cat for tipping over the box. But be relieved because the box wasn’t opened yet.

Your perception will also turn what you sense into actions. Such as scolding your cat if he is still in the room and picking up the box of food to put it away.

This example demonstrates the flow of perception from the bottom up to top-down because the senses lead to the emotional reaction. And the physical response after your brain put the information together when you investigated the strange noise you heard.

Top-down processing is more based on patterns than it is on conclusions after receiving sensory information.

In the previous text message example. When you see the combination of letters and the number in “C U L8r,” your mind sees the pattern. And knows what the letters and number sound like So it automatically concludes the message is “see you later.”

If you like pop music and hear the opening chords of a song. Then your brain uses the knowledge it has attained to guess which song is being played.

While it depends on the sense of hearing. The pattern of the musical notes allows your brain to think back to all the music it has heard to know which song is being played. This is another example of top down processing.

The brain reacts so quickly that you can think of the song almost instantly when you hear the first strands. Sometimes you may need to think about it for a few seconds. If it has been some time since you heard the song being played. But the answer usually comes to people quickly.

In 1966, a psychologist by the name of James Gibson theorized that bottom-up perception was direct, or innate, and didn’t require learning. This theory is sometimes called the “Ecological Theory.” Because it says perception can be explained based on the environment in which you find yourself.

Bottom-up perception allows us to survive in environments we may not be familiar with.

Because the senses react to stimulus, whether it is heard, smelled, saw, tasted, or touched. If you’re in a forest and hear crackling wood, see and smell smoke. Then your brain will instantly perceive the fire, and your body reacts by fleeing.

Gibson made the argument that perception is a bottom-up process.

Because it is evaluated from basic data perceived by the senses to more complex visual perceptions. An example of how the theory works is an optic array.

With Gibson’s theory, a pattern of light that reaches the eyes, the optic array. Contains all the information necessary to understand it.

The information perceived from the array is direct, or innate because it doesn’t require any more evaluation. Even if the array moves or the light intensity changes. People are still able to interpret the array because they have a stable and meaningful view of it.

His theory translates to “what you see is what you get.”

There isn’t any further need to evaluate anything. Because all the information you get is enough to help you survive in any environment around you.

On the other hand, a psychologist by the name of Richard Gregory claimed that perception is a top-down process.

Because the information people learn, and their experiences help them to perceive the world around them. He claimed by the time the information that is attained from visualization reaches the brain, about 90% of it is lost.

Losing this information means people need to depend on what they’ve learned and their experiences to perceive what they see.

For instance, if they see a tall rectangular shape with a knob on it. Their brain perceives it as a doorway from their past experiences. By just depending on visualization, a person may not be aware of what the rectangular object is. And they will need to further investigate it by turning the doorknob.

How Bottom-Up Perception is Used

Therapists can use a bottom-up approach to help patients with mental health issues or physical impairments. Psychologists or psychiatrists can take cues from how a patient physically reacts to questions. Or when describing their issues to help determine treatments for them.

For instance, if a situation the patient is discussing or questions they’re asked makes them queasy, start sweating, or nervous.

Then the therapist can see that and begin to determine how to approach their treatment. They may try to delve further into the issues to find out what traumas they experienced. That triggered their physical reactions.

In occupational therapy, a bottom-up approach is frequently utilized.

To help patients regain any motor skills that have been lost due to an accident or illness. Bottom-up assessments have been the standard for occupational therapists for decades when first meeting new clients.

Bottom-up assessments can help evaluate a new client’s skill level or how well they can perform occupational tasks. This approach focuses on evaluating the body’s functions or structure. To see how well a client can perform physical tasks that they were used to doing.

An example of a bottom-up assessment is Peabody’s Developmental Motor Scales that is used for evaluating a child’s ability to grasp objects.

The assessments included having children stack blocks or place coins in a box. To see how well they could grasp and move objects. These assessments help therapists evaluate motor skills to see if a child is where they should be developmentally.

The main factors of the bottom-up approach to criminal profiling are:

Canter’s theory included five key variables to try to identify patterns of behavior between similar offenses. To create profiles of the perpetrators.

The key variables he found by examining 66 sexual assault cases were:

These factors have been helpful in identifying perpetrators who committed two or more offenses. And establishing changes in behavior patterns that could indicate that similar crimes were committed by different people.

Bottom-up processing to determine offender profiles is seen as more reliable and objective. Than the top-down approach that is built using typologies of criminals who conducted the same sort of crimes.

While there are still questions and concerns about which approach is better, top down or bottom up. Both types of processing have their places when applied to mental health or occupational therapies.

What To Do When You Hit Rock Bottom

The Navy SEALs Breathing Technique to Calm Down