Stress is usually discussed as a health risk.  But not all stress is bad.  In fact, there is a point in which stress can produce some of our best work.  But at what point does stress turn from helping us perform into hindering our performance?  The Yerkes-Dodson law looks to explain this turning point.

The Yerkes-Dodson Law and Performance 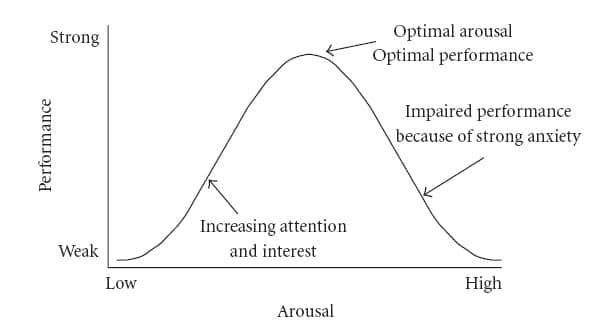 For instance, at a track meet, it is almost impossible for sprinters to get too aroused for a race. The task is direct, uncomplicated, and well-learned—run as fast as you can for a short distance. On the other hand, a baseball player facing a highly complex situation such as a three-ball two-strike at-bat will need to be fairly calm.  Excessive arousal will hinder performance.

Factors in Determining Optimal Stress for a Given Task

Your skill level directly influences how well you perform on any given task.  That is why it is extremely imperative to train a task so that it is well-learned.  Once a task is well-learned, your mind will respond to stress and high-pressure situations a lot better than if you are a novice to the task.  This goes for anything—from a hostage rescue situation to shooting to delivering a speech.  In addition, in high-pressure situations, we are less able to think on our feet and methodically, which is why it is extremely important to be able to fall back on well-rehearsed responses.

Your personality will also affect how well you perform in high-pressure situations.  Some scientists believe that extroverts naturally perform better than introverts in high-pressure situations, given all other things equal.  People who are introverts on the other hand, perform better than extroverts in environments with less stimuli and ample preparation.  It is useful to note that the vast majority of people are not classified as either introverts/extroverts; most of the population are actually ambiverts—people who possess traits of both introverts and extroverts.

Task complexity is, of course, the complexity of the given task.  It is the level of attention and the amount of effort asserted in order to successfully complete the task.  Again, simple activities can be performed successfully with high stress (or arousal) whereas most complex and unfamiliar tasks require a certain level of calmness stress in order to perform successfully.

Dave Grossman, in his book On Killing argues that we perform tasks involving motor skills at our peak is when our heart rate is between 115 and 145 beats per minute.  Grossman noted that when he measured the heart rate of champion sharpshooter Ron Avery, his heart beat was at the top of that range.  Grossman also noted that after 145 beats per minute, our body starts to go into hyperarousal, a state in which our bodies are too aroused to properly control our cognitive faculties and focus.