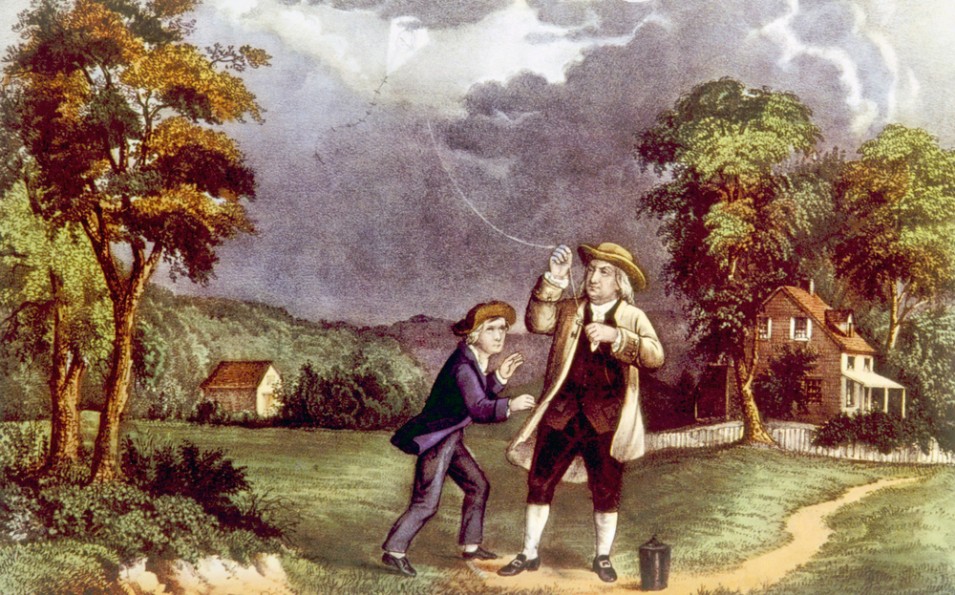 Benjamin Franklin was a man of many titles and an unmatched ability for accomplishment. He was a politician, an author, an inventor and a scientist. He was a theorist and an activist. Many of his ideas and inventions either greatly informed products of today, or still exist in their original form. He is known for his work in electricity and was a facilitator for many civic organizations. Franklin was a man that was clearly successful and knew how to get things done. So what was his secret to success? Like many other successful people, it came from dedication to his work and a heavy emphasis on time management.

Benjamin Franklin’s success was well deserved and was a byproduct of his own discipline and hard work. After a night’s sleep of seven hours, Franklin arose early in the morning at 5am, washed and set a plan for the day ahead of him. He began his day by asking what good he could do that day and addressed the “Powerful Goodness,” practicing a generic religion and spirituality that helped him to remain humble and grounded.

After eating breakfast, he would set to work from 8am to 12pm, devoting the next four hours to the field of study of the day’s work. Following an hour break for lunch from 12 t0 1pm, where he would look over his accounts and refuel, he would discipline himself for another four-hour stretch of dedicated work from 1 to 5pm.

After 5pm, his evenings were devoted to organizing his surroundings and enjoying dinner and entertainment. Music, conversation or other distractions were given a place in the day so that the day could be both productive and enjoyable. At the end of his day, Franklin would again touch on his intentions for the day by asking himself what good had he done for the day and then retire again for the night at 10pm.

Here is an illustration of his daily schedule for those who want a more visual presentation: 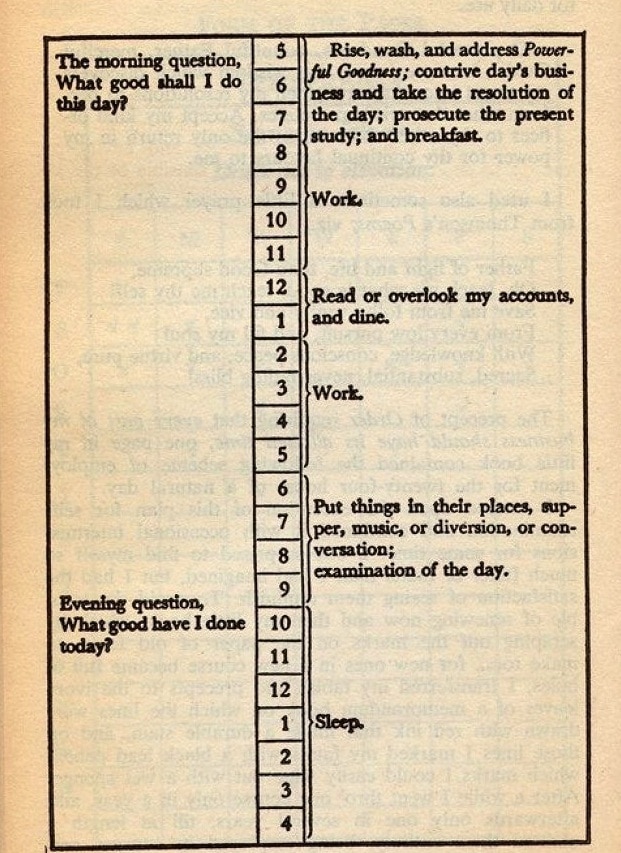 Benjamin Franklin can most certainly be an inspiration on how to set yourself up for success. Implementing a routine that helps to optimize the time in the day, helps to ensure that work will get the focus that it deserves, while still allowing time for your other daily duties. Once a routine is established, if it is performed each day, it will soon develop into a habit. While initially, it may seem too structured or rigid, making sure each task on the to-do list have its own space in the day will pay off in dividends and increase the potential for success.

Getting a good start to the day, getting dressed and mapping out a clear course of action, can set your expectations and help you to properly manage your time. In this early planning stage, set achievable goals, recognize any constraints, and account for any disruptions to the normal routine. Then plan accordingly.

Make time to set personal intentions and devote yourself to a higher power. Express gratitude for what you have accomplished while mapping out your next accomplishments. By placing yourself in a positive mindset and understanding the intentions of the day, you’ll start with the motivation to commit yourself to the good that you can also do.

Facilitate the time for three meals so that you can make good, healthy choices. If you prepare the meals for your family, factor that time into your routine so that you can focus on providing high-quality nutrition that will help to enhance health and increase your family’s overall energy level. Likewise, set enough time for sleep for these same reasons.

Similar to Franklin, make time in your schedule for entertainment, ensuring proper work-life balance. With so many entertainment options available today, it can easily become a distraction. Consider keeping these distractions to a minimum by giving them a place in the day’s schedule, and then making it a habit of using them only during this time of the day. If family time is important, make it a part of the routine. Set an intention to give it the time it deserves and then make it a habit of doing that, and only that, during its specified time.

It’s a good lesson to learn that each piece of your day-to-day life is important and in order for it to either not drain too much energy and time, nor get neglected completely, it should be given the space in the day that it warrants. Gaining clarity over your routine and schedule, and making it a daily habit will help you set the scene for success in your own life.