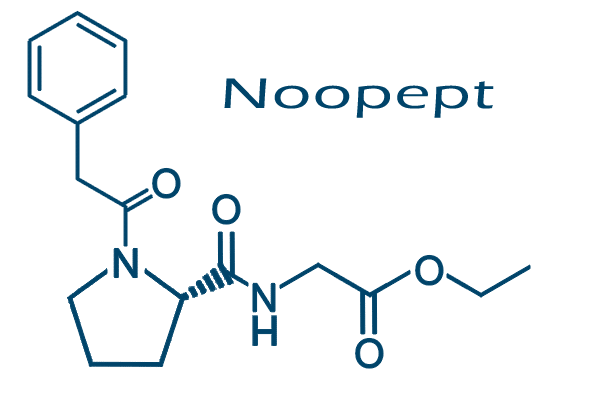 If you have been looking around the nootropics (smart drugs) community, you have invariably heard of noopept.  It is one of the most popular compounds smart drug eunthusiasts use to increase their mental acuity.  But what exactly is noopept?  And what are the scientific benefits of the brain supplement, if any?  In this article, we will go into explaining what noopept is, and what the benefits are.

The Origins of Noopept

Noopept is a dipeptide (a compound with two amino acids joined by a single peptide bond) that was synthesized to imitate the reactions of a vasopressin metabolite AVP(4-9) and piracetam.  It’s currently marketed in Russia and other countries as a medication to treat cognitive decline and disorders due to age.   In the United States, it is sold as supplement and a prescription is not necessary to obtain noopept.

Many people who take noopept cite that the drug has the most benefits and the least side effects of the many nootropics they have tried.  The benefits of taking noopept include:

Although its reactions are similar to those of the racetam family, it is found to be 1000 more potent

Side Effects of Noopept

Although almost any supplement and/or drug can have possible side effects, the potential side effects of noopept are small compared to other nootropics, and can largely be mitigated by following precise dosage instructions.  One of the more common side effects of nootropics when taken in large dosages is headaches—and noopept is not an exception to this.  In order to to prevent headaches when taking noopept, start out with lower dosages and then gradually move up.

There are also some reports of irritability with noopept, especially when taking in large dosages.  And of course, with anything, there couple be small allergic reactions with any supplement if your immune system is especially sensitive to allergies.

If you are pregnant, you should consult a physician before taking noopept, or any nootropic for that matter.

But other than the rare side effects described above, there aren’t too many things to worry about when taking noopept.

How to Take Noopept and Dosage Information

Noopept is taken orally either in raw form or in pill form.  It crosses the blood-brain barrier rather easily, and many people start to feel the effects of noopept within 15-30 of ingestion.  When taken, the compound then travels to specific glutamate receptor sites in the brain. Noopept then helps to inhibit the breakdown of glutamate, which is one of the more prominent neurotransmitters in the brain.  The glutamatergic system is believed to be crucial in memory formation, learning, and other cognitive processes related to higher intelligence.

Noopept can be taken on an empty stomach or with food.  And although the standard dosage is 10mg once to three times a day, it is recommended to start with 5mg to see if you feel any cognitive benefits and/or side effects with 5mg.  Once you know what 5mg feels like, move up.  If you do not feel the cognitive benefits at 10mg, then it would be okay to move up to 15mg or 20mg per dose.  In terms of resistance, studies do not find that users develop tolerance to noopept.  Rather, noopept is an adaptogens, meaning they get more effective with time.

To make the most of your experience with noopept, here is a list of recommendations for taking noopept: